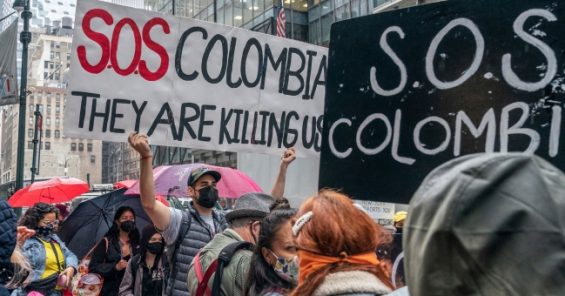 The Biden Administration must take immediate action to address the Colombian government’s use of “extreme violence” to quash peaceful protests, the leadership of some of the United States’ most powerful labour organizations said today.

In , Richard Trumka of the AFL-CIO, Mary Kay Henry of the SEIU, and James P. Hoffa of the International Brotherhood of Teamsters called on the American government to “to use all existing policy mechanisms available” to “bring Colombia into compliance with its international labour and human rights obligations” including trade policy and accession into the OECD.

The latest round of protests in Colombia began on 28 April, soon after the government of President Ivan Duque proposed a COVID-19 relief bill that would have transferred even more of the pandemic’s burden onto the shoulders of working people. While the legislation was quickly rescinded, it ignited action against long-standing inequalities and injustices across the country.

The labour leaders write that Duque government responded to these widespread, popular demonstrations with a militarized crackdown utilizing the Mobile Anti-Disturbances Squadron (ESMAD), a unit with a decades-long track record of human rights violations. To date, they write, Colombian forces have killed at least 42 people, and credible organizations have reported hundreds wounded, arbitrary detentions, and several cases of sexual assault against women.

We echo the call of 55 members of the U.S. House of Representatives who wrote to the State Department on May 14th calling on the Biden Administration to clearly denounce the excessive use of force against protesters and take specific measures, including the implementation of concrete adjustments in bilateral security cooperation, renewed emphasis on the full implementation the peace process and increased efforts toward authentic dialogue.

Given the close partnership between the United States and Colombia over the last twenty years, including regarding security issues, the United States should issue a clear public statement denouncing the excessive use of force by security forces and demanding accountability for those who have perpetrated violent crimes against protestors. In addition, the Administration should immediately suspend all forms of security assistance not related to human rights training to the national police and set clear time-bound benchmarks for improvements before assistance can resume.

For decades, the U.S. unions have been steadfast allies of the Colombian labour movement, and they note that this recent violence is part of a tragic pattern there. Labour leaders and social activists still routinely face credible death threats—even assassinations—with impunity, and the Duque administration has further weakened labour law.

“We join the U.S. labour movement’s call to action, and believe it is incredibly important for the Biden Administration to stand up for democracy and human rights in Colombia and in the region broadly,” said Marcio Monzane, Regional Secretary of UNI Americas. “The violence against peaceful demonstrators is a reflection of deep-seated issues in Colombia, and we agree with our U.S. brothers and sisters that President Biden should seek to address the root of the problems rather than the symptoms. One of the first steps to do that is for Colombia to accept the fact-finding mission proposed by the Inter-American Commission on Human Rights (IACHR).”