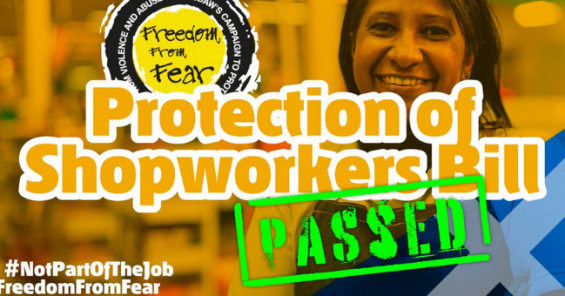 This week, UNI affiliate Usdaw helped enact a new law protecting Scottish retail workers from violence, abuse and harassment. UNI has been supporting Usdaw in its long-running fight to provide shopworkers with greater protections, which has taken on increased urgency as violence against retail workers in the UK has doubled during the pandemic.

“This Bill is a great first step towards protecting retail workers, and we hope it can be used as a reference point to build workers’ power everywhere,” said UNI General Secretary Christy Hoffman. “Essential retail workers all over the world have been on the frontlines for almost a year, providing food and supplies, despite the inherent risks of working through a global health crisis. Instead of abuse, these workers should be treated with respect and given the protections, wages and dignity they deserve.”

The Bill, which was submitted by Daniel Johnson, the Labour MSP for Edinburgh Southern, increases protections for retail workers by:

After a petition to protect workers from abuse met the threshold of 100,000 signatures needed to trigger a debate in the UK Parliament, General Secretary of Usdaw Paddy Lillis underlined the need to push on and use the Scottish Bill as a platform to break through for workers in the UK and beyond.

“We are now looking for MPs to support key workers across the retail sector and help turn around the UK government’s opposition.”