We Mourn Christian Krähling, a leader in the fight to Make Amazon Pay in Germany and everywhere 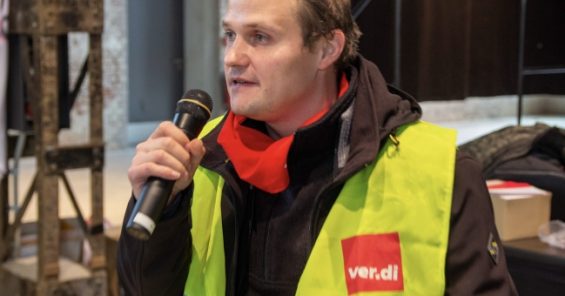 Christian Krähling, suddenly and unexpectedly, passed away on December 10. His death is a great loss for his family, his union ver.di, and the fight for justice at Amazon in Germany and everywhere.

Christian became a leader in the campaign to ensure that Amazon workers enjoy strong union representation in Germany. As spokesman for the ver.di shop stewards, he campaigned to strengthen solidarity between Amazon employees everywhere and participated in many strikes in Bad Hersfeld, where workers continue fighting for respect seven years after the fight walkout. Christian had worked in Amazon in Bad Hersfeld since 2009. He was the co-founder of Amazon Workers International (AWI), and a member of the Amazon works council in his warehouse.  At strike meetings, he not only called for active struggle but also urged prudence to take all colleagues along in the long and difficult fight to win rights and respect.

All over the world trade unionists are mourning the loss of one of the most important activists in the global struggle of Amazon workers for better pay and good working conditions.

His colleagues at ver.di remember him as a charismatic and positive person: “Christian’s sudden death stunned us, we still had so much to do together. Above all, we will miss his imperturbable manner, his humor, and his willingness to stand up for all colleagues in the company. He will be missing in future disputes and yet be “present” for us.”

The Global Labour Movement and his union in Germany will honor his legacy by continuing to work for an Amazon where workers’ voices are respected. Our condolences go to his family and his union brothers and sisters at ver.di.