“We want to be respected, not exploited,” say Polish retail workers 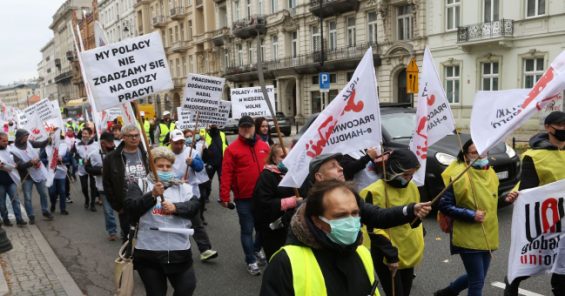 UNI Global Union joined hundreds of workers at a 4 November demonstration in Warsaw to protest against harsh working conditions, low pay and violations of trade union rights at multinational retailers in the country.

Commerce workers from different cities and companies gathered in the Polish capital brandishing placards saying “We want to be respected, not exploited” plus many other messages to retailers for the protest organized by UNI affiliate Solidarność.

Some protestors used Halloween costumes to get their message across: “These working conditions are killing us” read one sign by a protester dressed like the grim reaper. Others wore chains and shackles and some workers dressed in clothes made of sacks that refer to the near poverty level pay in the retail sector.

The first stop on the protest march was the office of the employers’ association, the Polish Organization of Commerce and Distribution (POHID).

“POHID does not want to negotiate or have any dialogue with workers with us because multinational companies affiliated with POHID do not want unions around the table,” said Alfred Bujara, the President of NSZZ Solidarność. “In the absence of collective bargaining, they can force one worker to do the job of two. This is pure exploitation through understaffing.”

Dariusz Paczuski, the Deputy President of Solidarność Commerce, said POHID unilaterally raised pay only one per cent higher than the government’s minimum wage increase. “They argue that it is a good pay rise. It is ridiculous. We demand a fair pay rise determined through collective bargaining,” he said.

“It is totally unacceptable that there is not even a single collective agreement with the multinational retailers operating in Poland,” said Onur Bakir, Coordinator of UNI Commerce. “It is a shame that some companies are applying different standards in Poland than they would elsewhere. It must change, and we will change it together.”

Workers and trade union leaders from different companies including Carrefour, Auchan, Amazon and Daisy took to the stage in the protest and drew attention to the inhumane working conditions and high workload which lead to stress related mental health effects and physical problems such as musculoskeletal disorders.

Following speeches, workers marched to the French and German embassies to deliver a petition calling on them to ensure that French and German multinationals no longer deprive Polish workers from the trade union rights that would be respected in their home countries.

The protest ended with a commitment to grow union organizing in retail sector.