With full commitment, Santander workers in Argentina adhered to the National Strike 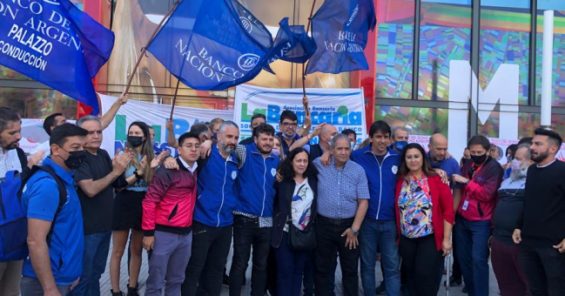 On December 10, La Bancaria Argentina carried out a new National Strike with the support of Santander workers throughout the country. None of the bank’s branches or call centers operated that day, and all activities in central areas came to a halt.

The reason for the strike, as stated by the union, was due to the fact that Santander in Argentina “persists in outsourcing banking operations to avoid compliance with working conditions, continues with the process of closing one hundred branches throughout the country, while refusing to pay a regular annual bonus”, a right that was achieved by the union.

“This is one of the first national measures taken against Banco Santander. They are defying us to see who is stronger, instead of establishing a dialogue and solving the problems that the union raises on behalf of the workers. If that’s what they want, we will not take one step back” said Sergio Palazzo, General Secretary of La Bancaria.

“If this is what they do in different countries, and in particular in Spain, violating workers’ rights, in Argentina there is a union organization that is standing strong and will fight until the end, saying that here dignity is respected, workers’ rights are not taken away, and they can count on the solidarity of all brothers and sisters to carry out their actions” he concluded.

Union leaders and activists went to all the bank’s branches throughout the country to make sure that the branches did not open that day, and raised awareness that the closing of branches affects public services and creates more precarious employment.

“We cannot allow companies the size of Santander to have these practices in the region. We say no to the closure of branches and we express our full support for La Bancaria in Argentina,” said Marcio Monzane, UNI Americas Regional Secretary. He also highlighted Santander’s lack of dialogue in Brazil, where CONTRAF-Cut is calling on the bank to negotiate and listen to workers: “We support the workers’ struggle to defend jobs. We condemn that Santander does not sit at the dialogue table, and we hope this will happen shortly. From UNI we will continue supporting our affiliates in Brazil and Argentina” he concluded.