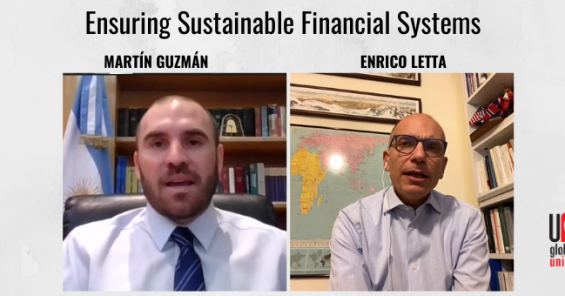 Trade unions have a key role to play in ensuring Covid-19 recovery programmes are equitable and in helping to rebuild transatlantic cooperation between the US and Europe, according to a UNI Global Union webinar with Argentina’s Minister of Economy, Martín Guzmán and the former Prime Minister of Italy, Enrico Letta, on 9 November.

“Recovery and resilience are the watchwords across the globe,” said UNI General Secretary, Christy Hoffman, who moderated the event. “It’s clear that we must do whatever is necessary not to have a repeat of the 2008 crash – when banks were bailed out by billions of public funds – but the public itself suffered a decade of austerity.

“As trade unions, we must make sure that, this time round, recovery funds come with a social guarantee. That means investing in the real economy and giving financial support to companies that support trade union rights, collective bargaining and green and sustainable jobs.”

In many cases, said the Minister, countries are simply unable to make repayments without undermining the development prospects of those societies. “It takes too long to address a sovereign debt crisis, and in many cases the resolution does not go deep enough to help a country in distress,” said Guzmán.

The Minister also highlighted the need for responsible borrowing, especially for countries like Argentina that have long histories of instability when it comes to debt and foreign currency.

In this context, the Minister said that a new bill being put forward to parliament this week, would mean the government would have to seek approval from Congress before borrowing foreign currency.

“From now on, any programme between the IMF and Argentina will have to have the approval of the National Congress if this bill passes,” said the Minister.

In Latin America, UNI has a campaign to support state-owned banks, and the Minister outlined the importance of public banks in helping to finance projects that help to boost production and create jobs. He added that public banks in Argentina had played a very important role in providing services to help society deal with the consequences of Covid-19. He also praised the role of trade unions in Argentina in helping to maintain stability, jobs and economic activity during the pandemic.

The European Union has been quick to respond to the coronavirus crisis, taking only four months to agree upon the 750 billion euro Next Generation EU recovery fund, said Enrico Letta who is Dean of the School of International Affairs at Sciences Po in Paris.

He said the EU had learned its lesson from the 2008 crash, when it had taken four years, instead of four months, to provide a recovery plan through the European Stability Mechanism (ESM). The delay, Letta said, had led to an economic and social ‘disaster’ in Europe that increased unemployment and led to a rise in populism.

He said this time, the EU had delivered a revolutionary response based on the social pillar of solidarity and, rather than one country giving money to another, the European Commission will raise the funds through bonds, with financial support being distributed to nations on the basis of needs and not strength.

He said trade unions need to have a role in every step of Next Generation EU funding, including implementation and checks.

Letta welcomed the result of the US election: “We have to take the momentum and opportunity of this new Biden era, considering that he is someone who believes in multilateral and transatlantic cooperation, including at the financial level,” he said adding that the European and global trade union movement can be important actors in helping to improve multilateralism.

Letta also called for a relaunch of the G20, which could have a great impact in terms of sharing rules, best practices and taking important decisions on taxes, particularly in relation to tech giants, the black economy and fiscal tax havens.

“Trade unions have a vital role to play in achieving a lasting, sustainable, financial sector and we welcome both speakers highlighting the importance of the union movement,” said UNI Head of Finance, Angelo Di Cristo. “We can achieve a fairer society but only if we work together.”