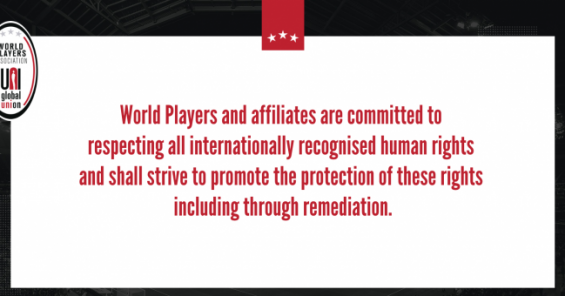 (Nyon, Switzerland, Friday December 18, 2020) – The leaders of the player and athlete associations of the world gathered virtually on 15 December to close 2020, an extraordinary year of athlete activism and collective action to advance human rights and address Covid-19 in the world of sport.

The 4th World Assembly of the World Players Association unanimously resolved to adopt a constitutional commitment to advance human rights in, through and beyond sport. Article 3 of the Rules of World Players now reads:

“World Players and affiliates are committed to respecting all internationally recognised human rights and shall strive to promote the protection of these rights including through remediation.”

“World Players has a steadfast commitment to embedding the human rights of the players and everyone who makes sport possible. That commitment means we must lead by example through our constitutional obligations and the effort we make to ensure human rights are respected within the governance of our organization.

“Together, the players associations constitute a very significant movement. World Players unites 85,000 professional athletes through more than 100 player and athlete associations based in more than 60 countries. Some of our affiliated player associations are among the world’s strongest labour organizations and are major businesses in their own right.

“Since at least the early 1960s, our movement has been instrumental in ensuring that the fundamental rights of players at work have been respected. Our movement is now championing racial justice, gender equality, the rights of child athletes and, indeed, the internationally recognized human rights of everyone impacted by sport, including workers, local communities, media representatives, fans and vulnerable groups. Player associations have taken strong action to address abuse and support victims.

“We believe that on a platform of the right to organize and collective bargaining, it is possible for players to achieve systemic change. This belief is elevated by the outcomes being achieved by players at the bargaining table and through their activism.

“To enact this belief, our movement must ensure we are culturally attuned to the needs and diversity of all players who have the right to belong to our movement, the responsibilities of representation, and how which we exercise leverage.

“The players association movement is the gateway to the fulfilment of human rights in and through sport.”

2020: The world of sport is bending towards justice

World Players’ decision to make a constitutional commitment to human rights comes when the trajectory of global sport is bending towards justice:

On 2 December, independent human rights experts Zeid Ra’ad Al Hussein and Rachel Davis also recommended this commitment be made by the IOC as part of the development of an IOC human rights strategy.

World Players: Commitment to building partnerships to ensure the legitimacy of sport

World Players is acutely aware that sport, despite its power to be a force for good, is still causing or associated with severe human and athlete rights harms which continue to undermine its legitimacy. The World Assembly acknowledged much more work is required by the players association movement and all stakeholders to ensure that human and athlete rights are fully embedded in global sport. The commitment of World Players to work in partnership with the IOC to realize the recommendations for an IOC human rights strategy by 2024 was restated.

Advancing dialogue and the rights of athletes with the IOC, the World Anti-Doping Agency (WADA), other sport governing bodies and key stakeholders will be key priorities for World Players and affiliates throughout 2021. The importance of ensuring access to remedy for all affected by the delivery of global sport is one area that requires urgent action and special attention. World Players will continue to play a leadership role in the development of the Centre for Sport & Human Rights to help it realize its vision of a world of sport which is fully aligned with the fundamental principles of human dignity, human rights and labour rights.

All World Players affiliates attended the World Assembly, with the leadership of the player association movement represented by: 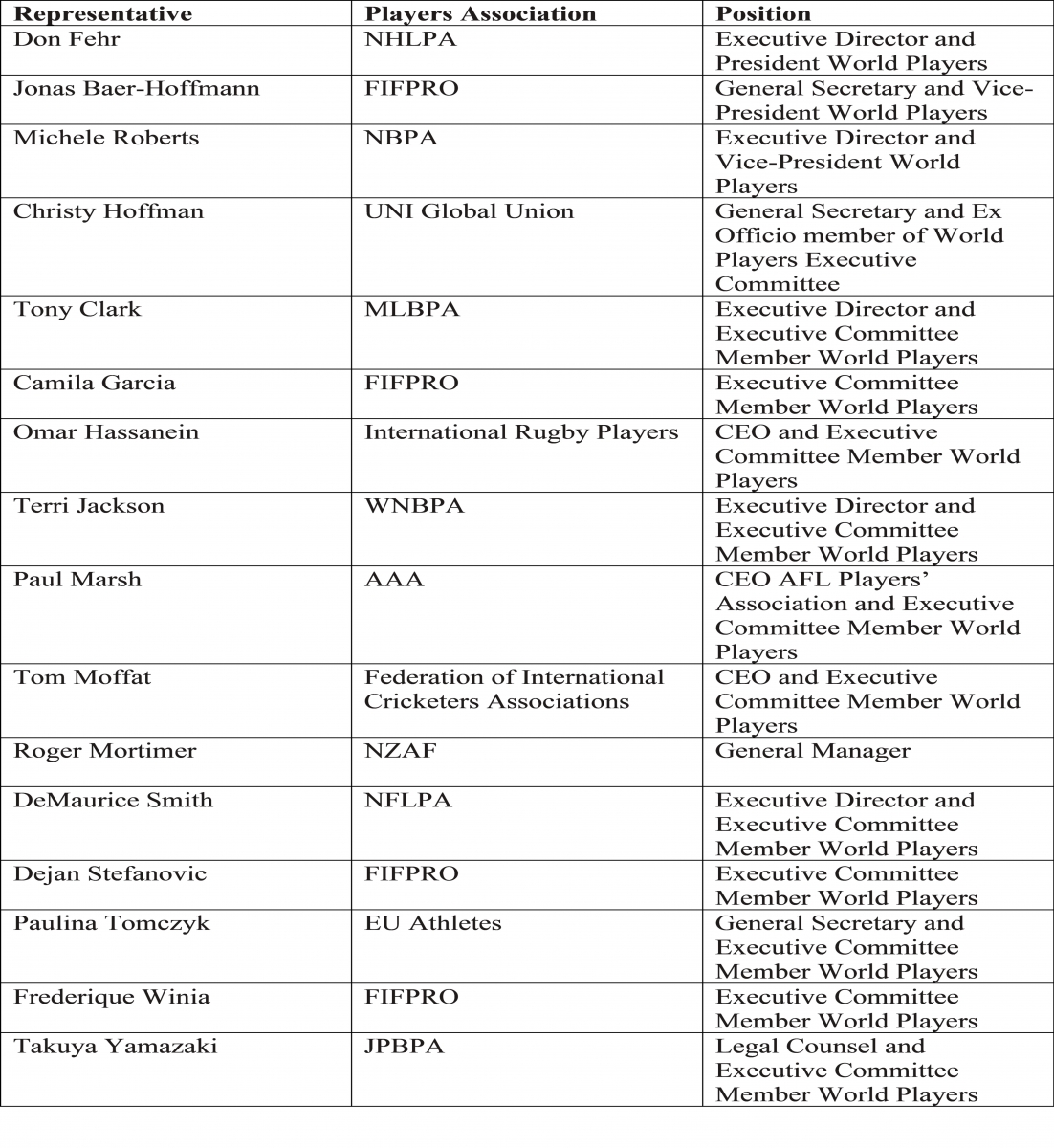