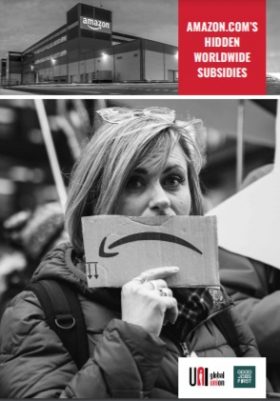 Amazon, the $1.4 trillion tech juggernaut and notorious tax-dodger, is not only vying for more consumers’ dollars, it also aggressively seeks taxpayers’ money. According to a new report by UNI Global Union and Good Jobs First, Amazon has systematically secured economic development subsidies that now total at least $4.7 billion globally over the past decade.

From Buenos Aires to Hyderabad, the available evidence pulled from public records, investor reports and company statements suggests Amazon has an insatiable appetite for public subsidies. The tax breaks received for opening data centres, warehouses or office complexes that help Amazon gain a market-share advantage are likely much larger. According to the authors of the report “due to poor disclosure practices in most countries, the costs of such deals are hidden: the total is undoubtedly significantly higher.”