The UNI Global Union Freedom from Fear Awards are in recognition of the work of affiliates or individual members for a world “free from fear.” 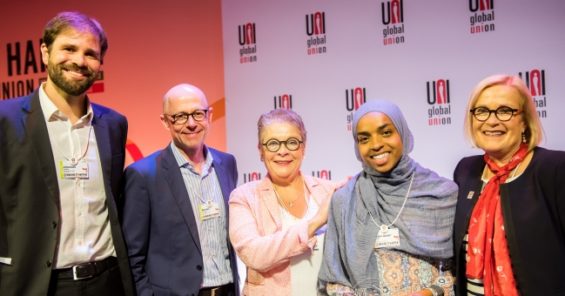 For her successful campaign to have FIBA’s hijab ban overturned. This involved great personal sacrifice, as she was unable to play for three years. Her campaign brought together World Players Association, Human Rights Watch, Shirzanan, Athlete Ally and basketball players’ associations from around the world.

Human rights defender and Bahraini footballer Hakeem al-Araibi and the campaign to free him from illegal detention in a Thai prison and prevent his extradition to Bahrain. The campaign was led by former Australian football captain Craig Foster working in close cooperation with World Players Association. It brought together our affiliates Professional Footballers Australia and FIFPro, as well as FIFA, the IOC, the Australian Government, the Consulate Staff in Thailand, the ACTU, Football Federation Australia, Football Victoria, Human Rights Watch, Amnesty International, BIRD, GIDHR, the Sports and Rights Alliance, the International Trade Union Confederation, the Centre for Sport and Human Rights, many professional player associations and affiliates of World Players, football players and fans from all over the world and Hakeem’s legal team in Thailand led by Nadthasiri Bergman. The release of Hakeem marks an important turning point for the sport and human rights movement. Hakeem was an Australian resident at the time of his imprisonment and has since been granted Australian citizenship.