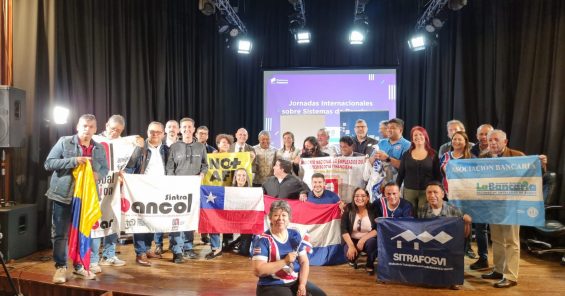 From 3 to 5 May, trade unions from the Finance sector, affiliated to UNI Americas, deepened their analysis of the current pension system at the International Meeting on Provisional Systems in Montevideo. Held at the offices of AEBU, and with the support of FES, delegates from Costa Rica to Chile highlighted the fundamental role of the trade union movement and the state in social protection for fairer societies and the right to a dignified life. In the region, several governments have carried out reforms to their pension systems, which have had a profound impact on the general population, with an increase in the cost of living and increasingly precarious conditions.

“Between 2012 and 2019, there has been very little change in workers’ coverage. Current transfers from the social security system play an important role in preventing poverty in the adult population. Ageing is also a challenge for our societies,” said Ernesto Murro, former Minister of Labour of Uruguay, who participated with a local and regional analysis of the different realities and pension systems in the different countries of the region, analysing the failure of the private individually funded systems. In the context of a reform in Uruguay, he added, “Where do we draw the line on when people should retire? It is not just a question of raising the retirement age. The poor live less than the non-poor, because it seems that everyone lives the same,” he concluded.

Guillermo Maffeo, Regional Director of UNI Americas Finance, stressed that the impact of the pandemic continues to grow and further exposed the injustices and inequalities in our continent, where the pension system is not outside the capitalist logic. “Trade unions are the only guarantors that pension systems address poverty, inclusion and gender; from UNI we work and fight for this. If we are not present, the market only deals with the voracity and profit of private companies,” he said.

During the debate, the withdrawal of funds from the AFPs in several countries that no longer have pension funds to finance their pensions and state reforms that make retirement more precarious were highlighted. If money is taken out of pensions, how does the state respond? “Social dialogue is a key component in the discussion of the pension system and the trade union movement has been a crucial actor and spokesperson against reforms that have meant a step backwards in terms of rights,” said Marcio Monzane, regional secretary of UNI Americas. Similarly, Rita Berlofa, president of UNI Finance, insisted: “The state has to guarantee a decent retirement for all workers, whether they are formal or not, these activities are essential to continue advancing the debate, especially in our sector.”

Comrades from Argentina, Brazil, Chile, Colombia, Costa Rica, El Salvador, Paraguay, Peru and Uruguay reached important agreements and commitments in defence of strong social security systems in the region and for the recovery of this right in countries where it does not exist. The message was clear: there will be no solution without the establishment of a Public Solidarity Pension System in Latin America. To close, the participants mobilised at the City Bank in Montevideo, in support of AEBU in rejection of the attempted dismissal of 16 colleagues in Uruguay.