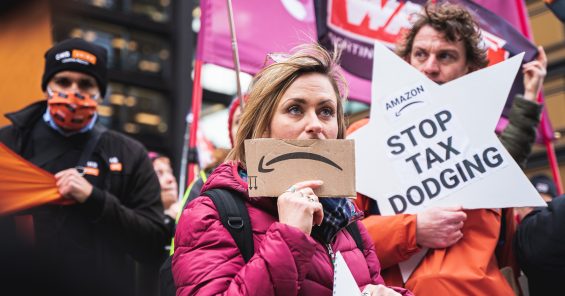 Amazon, the $1.4 trillion tech juggernaut and notorious tax-dodger, is not only vying for more consumers’ dollars, it also aggressively seeks taxpayers’ money. According to a new report by UNI Global Union and Good Jobs First, Amazon has systematically secured economic development subsidies that now total at least $4.7 billion globally over the past decade.

The report is online here.

From Buenos Aires to Hyderabad, the available evidence pulled from public records, investor reports and company statements suggests Amazon has an insatiable appetite for public subsidies. The tax breaks received for opening data centres, warehouses or office complexes that help Amazon gain a market-share advantage are likely much larger. According to the authors of the report “due to poor disclosure practices in most countries, the costs of such deals are hidden: the total is undoubtedly significantly higher.”

“Amazon is one of the richest and fastest growing companies in the world. It racked up $44 billion in European sales in 2020 but paid no corporate taxes—all while snooping on workers and dragging down labour conditions,” said Christy Hoffman, General Secretary of UNI Global Union.  “It shouldn’t receive a penny from taxpayers.”

“Amazon’s rapid delivery business model means it need to locate warehouses in communities everywhere, near major transport routes, airports, and other business basics. There’s no reason for national, regional, state or local governments to help offset Amazon’s costs for operations that are core to its strategy,” said Kenneth Thomas, a research fellow at Good Jobs First and expert in European and Canadian incentive systems compared to that of the United States. “They should stop providing subsidies to Amazon, and instead use the money to invest in small businesses and public services.”

The report concludes that countries and their subnational governments should disclose the names of the entities that have been awarded subsidies but ultimately recommends that governments stay out of subsidizing Amazon, one of the largest companies in the world: “State aid is intended to help companies grow their operations in areas they otherwise wouldn’t, and help disinvested communities receive an economic jolt. Amazon’s operations do neither; indeed, in providing Amazon subsidies, governments are aiding and abetting a multinational corporation that underpays workers, drives down wages, contributes to the demise of small businesses and engages in anti-competitive behaviours.”

In recent years, criticism of the tech giant’s reprehensible practices has brought together a broad group of actors from civil society. Last October, the UNI Global Union-supported the Make Amazon Pay coalition of over 70 trade unions, NGOs, environmentalists and tax watchdogs including Progressive International, Oxfam, Greenpeace, 350.org, and the Tax Justice Network, as they promoted strikes and protests in over 20 countries on Black Friday to demand Amazon pay its workers fairly and respects their right to join unions, pays its fair share of taxes, and commits to real environmental sustainability.

Good Jobs First is a national policy resource center based in Washington, DC that promotes corporate and government accountability in economic development.