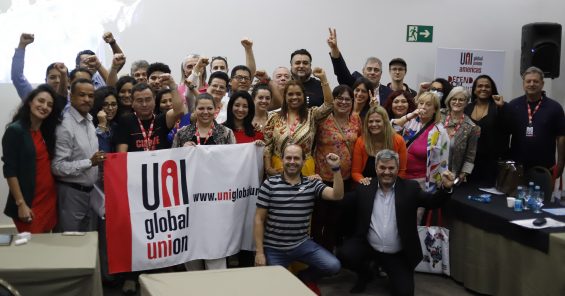 Fortaleza, Brazil, was host to UNI Americas 5th Forum of the New World of Work on 27 June, where union leaders from the American continent met to discuss the future of work and its impact on labour rights and the union movement, especially in the commerce and trade sector. At the center of attention was the phenomenon of the “platformization” of jobs, which, although not exclusive to the region, has had a strong impact on the precariousness of working conditions.

Camila Lara of the Union of Platform Workers in Uruguay, which is affiliated to UNI Global Union through FUECYS, said: “The consumer really needs to understand what is behind these applications, we need to show the reality of the platforms not only among workers but in society as a whole. In addition, we must seek more collective strategies at the regional level because we have the same objectives and challenges. We believe in a global organization regarding this issue.”

Adam Obenauer, a trade unionist with RWDSU in the USA, gave a detailed description of the egregious anti-union practices and brutal working conditions at Amazon. Along with describing the constant disrespect and daily dangers that plague workers as “dystopian,” Obenauer recounted example after example of intimidation and illegal retaliation against union activists fighting for dignity in their daily lives.

However, the unionist also inspired attendees by highlighting the persistence, unity and hope of workers at Amazon across the U.S., who against all expectation and all threats, continue to fight. “The workers are uniting all over the country, because this struggle is one, wherever it is.”

The event concluded with the commitment of leaders from multiple countries pledging support and solidarity with the struggle for the defense of labour rights in the countries of the region. In the words of Guillermo Bianchi from FAECYS, Argentina: “As we have been saying for a long time, we are going to build a labour society. We must transform our mechanisms of struggle into real agents of change”.