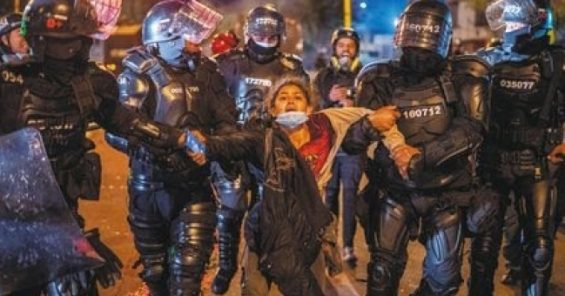 On June 8, the Inter-American Commission on Human Rights (IACHR) was invited to Colombia to investigate human rights violations, and on July 7 it released observations and recommendations, which look to help address the country’s ongoing human rights crisis.

UNI is proud to have been at the center of efforts this year to advocate that the CIDH request an in-country visit to Colombia, and that the Colombian government accept this request. Unions from more than 50 countries have shared more than 1,000 videos on social media, and on May 4 the IACHR joined our campaign in a virtual panel, coinciding with the onset of national protests in Colombia, in which more than 40 protestors were killed by security forces. Forty-eight UNI unions joined 500 other organizations to amplify the campaign’s message in a letter to the IACHR, and soon afterwards the Commission requested that the Colombian government authorize a delegation. The Duque Administration, however, rejected this proposal.

On May 26, UNI worked with US-based union organizations AFL-CIO, SEIU and the Teamsters to send a letter to the Biden Administration, asking it to urge Colombia to authorize an IACHR delegation. The following day this letter was covered in major Bogota newspapers, and the Colombian government changed its position, announcing it would allow the Commission’s visit.

The new report emphasizes the importance that Colombia continue to implement the 2016 peace accords, and expresses concern about the murder of 310 social leaders, trade unionists, and human rights defenders in 2020. It also calls for an end to human rights violations during protests and indicates that public mobilizations have been a reaction to human rights violations, extreme inequality, widespread poverty, and citizens’ lack of access to quality education, healthcare, and employment.

The IACHR emphasizes that social conflict and demonstrations will only end when there is meaningful dialogue with marginalized groups, and a Special Follow-up Mechanism on Human Rights for Colombia is installed to consolidate the peaceful resolution of conflict in diverse sectors of society.

The Duque administration, however, has brushed the IACHR’s recommendations aside, stating “No one can recommend that any country tolerate criminal acts”, and rejecting the commission’s recommendation to separate the Police from the Ministry of Defense and the creation of a special monitoring mechanism on human rights.

UNI urges Colombia to cooperate with the IACHR and its technical team responsible for installing a Special Follow-up Mechanism, engage in dialogue with protesters, adhere to IACHR recommendations regarding police reform.

In addition, UNI believes deeper reform will be necessary to overcome social conflict in Colombia and solve the country´s underlying social, economic, and employment-related challenges. A program to provide universal basic income is urgently needed during the COVID crisis. Measures must be taken to address widespread labor informality, and change regulations that incentivize part-time work, jobs paid below the minimum wage, outsourcing, and practices that systematically weaken unions and prevent collective bargaining. Such regulations, some of which have been implemented by Duque during the pandemic, deny Colombian decent jobs, deepen social inequality, and cause instability.