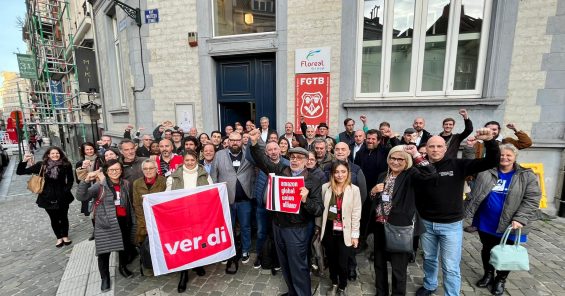 Right as the Amazon Global Union Alliance was meeting In Brussels for the first in-person since the beginning of the pandemic, the Make Amazon Pay campaign  announced today a major global day of action with strikes and protests in around 30 countries on 25 November, the shopping day known as Black Friday. The campaign charges Amazon with “squeezing every last drop it can” from “workers, communities and the planet” in the face of the cost of living scandal, global debt crisis and climate emergency.

Make Amazon Pay, co-convened by UNI Global Union and the Progressive International, is a coalition of over 80 unions, civil society organisations,  environmentalists and tax watchdogs including UNI Global Union, the Progressive International, Greenpeace, 350.org, Tax Justice Network and Amazon Workers International. The coalition is united behind a set of common demands that Amazon pays its workers fairly and respects their right to join unions, pays its fair share of taxes and commits to real environmental sustainability.

On 25 November, Amazon will face strikes and protests in at least Argentina, Australia, Austria, Bangladesh, Belgium, Brazil, Cambodia, Canada, Czech Republic, France, Germany, Hungary, India, Japan, Luxembourg, Netherlands, Palestine, Poland, Slovakia, South Africa, Turkey, the UK and the US, with more being planned. The actions will bring together workers across Amazon’s supply chain with environmental groups, civil society groups and political leaders. The coalition is inviting members of the public to sign up to get involved in actions and groups to contact them about hosting actions via MakeAmazonPay.com.

This is the third year that Make Amazon Pay has organised a global day of action on Black Friday. Highlights from previous years include: thousands of workers striking at facilities throughout Germany, major workers’ protests in Bangladesh, demonstrations projecting the Make Amazon Pay logo at Amazon headquarters all over the world, projecting “pandemic profiteer” onto Jeff Bezos mansion, and Extinction Rebellion blockading distribution centres in the UK.

“On Black Friday, in what has already been named #MakeAmazonPay day, unions, civil society and progressive elected officials will stand shoulder to shoulder in a massive global day of action to denounce Amazon’s despicable multimillion dollar campaigns to kill worker-lead union efforts. It’s time for the tech giant to cease their awful, unsafe practices immediately, respect the law and negotiate with the workers who want to make their jobs better.”

“We all know that the price of everything is going up, as is the temperature of our planet. Instead of paying its workers fairly, its taxes in full and for its damage to our environment, Amazon is squeezing every last drop it can workers, communities and the planet.

“As workers around the world struggle with the cost of living scandal, Amazon, despite its enormous profits, is forcing real terms pay cuts on its workers. It shirks its taxes and its CO2 emissions are soaring – up 18% in 2021 – even though Amazon only counts the emissions of 1% of its products sold.”

“In the face of the cost of living scandal, global debt crisis and climate emergency, we all have to come together to Make Amazon Pay.”

“Garment workers, like those I represent, toil to swell Amazon’s coffers often without any recognition that we are even Amazon workers. Amazon is the third largest direct employer in the world, but when you take us in the supply chain into account, it is even larger. At work we can face sexual harassment from management and victimisation when we try to organise in a trade union against that violence and for better pay and conditions.

“In Bangladesh, we are on the frontline of climate breakdown, so we know climate justice and social justice cannot be separated.

“We have to Make Amazon Pay all its workers a decent wage in dignified workplaces and for its environmental damage.”