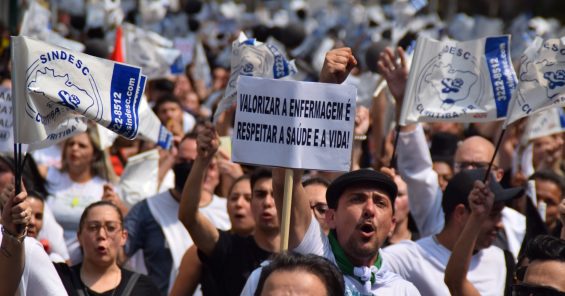 Unions across Brazil—many affiliates of UNI Global Union—took to the streets in recent days to demand implementation of the new federal nursing minimum wage (#PisoEnfermagem) and protest anti-worker actions by employers, some public officials, and justices of the Brazilian Supreme Court (STF). The unions want decent wages and treatment as well as compliance with Law No. 14,434/2022.

The law, approved in congress and approved by the president on 5 August, mandates a floor of R$4,750/month for nurses; 70% of this amount (or R$3,325) for nurse technicians; and 50% (or R$2,375) for nursing assistants. The law was recently suspended due to an injunction issued by Justice Luis Roberto Barroso of the STF, who questioned the lack of mechanisms to finance the associated costs.

“The approval of this law, which sets a more dignified minimum salary for nurses, nurse technicians, nursing assistants and midwives, was the result of more than 30 years of struggle by healthcare workers’ organizations, and provided social justice to a group of workers that was and is on the front line to fight the pandemic and in the provision of one of the most essential services of society, which is caring for the health of the people. Even the STF’s own decision, contradictorily, states that these workers deserve the new minimum, but then denies them that right. The Justice (Barroso) preferred to serve healthcare companies in the private sector, some of which are multinational; these companies form the supplementary health network and receive the most profits from the healthcare sector in our country.” 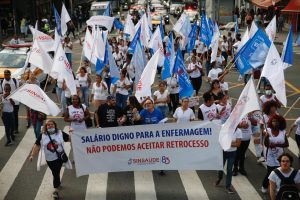 The Health Workers Union of Belo Horizonte and Region (SINDEESS), an affiliate of CSP Conlutas, was one of several unions that this week, in addition to calling for street protests, convened meetings to debate a strike. In a communication sent to workers, the union stated:

“As expected, the response of companies in relation to the Nursing Minimum Wage was not to comply with LAW No. 14,434, approved on 4 August 4 2022. We are aware of several hospitals . . .who have already payed monthly salaries without the increase, and others have already communicated that they will not pay the new minimum. For these reasons, SINDEESS calls on all health workers to participate in a Grand Assembly on the 12th and 13th of September (Monday and Tuesday), in Praça Sete, at 7 am. We will publish a strike notice on September 12. Don’t expect others to fight for you. Let’s all take to the streets to fight together!”

The National Confederation of Social Security Workers (CNTSS/CUT), in a press release, expressed its “annoyance and indignation with the measure taken by Judge Barroso since the entire process of implementing the law was discussed exhaustively, including studies on its financial impact, involving parliamentarians, workers and representatives of the private and public sectors. The attitude reiterates the uncompromising stance of employers who refuse to comply with the law, once again harming and undervaluing nursing workers.”

Márcio Monzane, Regional Secretary of UNI Americas, the regional arm of UNI Global Union, said, “UNI Americas expresses our strong solidarity with healthcare unions in defense of these hard-won rights, and demands that the Brazilian judiciary – together with the Ministries of Labour and Health as well as private health companies – enforce the new Federal Nursing Minimum Wage, having been duly debated and approved through the legislative process. As a global union, we stand side by side with the workers who form the front line in defense of the population and its health, and we support the actions of our affiliates to continue to press for the recognition and expansion of labour rights, to guarantee the necessary conditions for providing quality care to patients.”