Chile moves forward in the fight against harassment and violence in the world of work, congress to vote on ratification of ILO C190 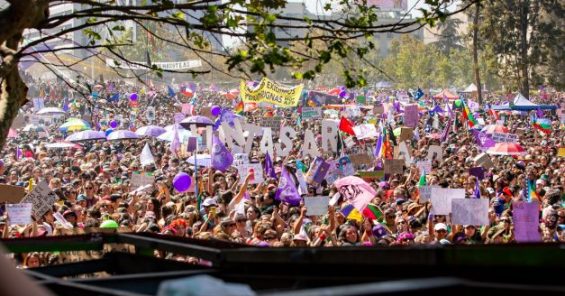 On Monday 29 August, Chile took another step forward on the road to social justice and the fight against workplace harassment with  presidential approval for a congressional vote on the ratification of ILO Convention 190. If ratified, by the government would be required to put in place rules for the eradication of violence and harassment in the workplace.

The President of the Republic Gabriel Boric, together with the Minister of Labour and Social Security Jeanette Jara, the Minister of Women and Gender Equality Antonia Orellana, and the Minister of Foreign Affairs Antonia Urrejola, were accompanied by trade union leaders from UNI Americas affiliates FENASSAP, CONATRACOPS and CSTEBA. The labour leaders have been on the front-lines of the effort to make the convention a reality in Chile.

“This is a historic day for women workers in the struggle to achieve safe workplaces, which strongly affects our industry, due to the sad events that we have witnessed in recent times,” said Gloria Flores, president of Fenassap, a care union​ that represents workers from the private sector. “We want to highlight the consequences of not having workplace protections, and the negative effects it has on our health. One of the main causes of workplace violence reported is the lack of tolerance among peers and abuse by their bosses, which has led to suicides and very aggressive attacks among colleagues in the sector.”

This announcement comes after years of intense work by the country’s trade union movement to create a framework that promotes dignity of the world of work. UNI Americas Women’s Network in Chile has also been leaders in this effort.

Convention 190 is the first international standard that addresses violence and harassment in the workplace through a specific instrument referring to the rules governing labour relations.  While this instrument will address issues across the board for men and women in the world of work, it pays special attention to women, young people, migrants and people belonging to the LGBTIQ+ community, as they are particularly impacted by discrimination, violence and harassment. According to the Chilean government, 25 per cent of harassment complaints to the Chilean Labour Directorate are about sexual harassment, and 92 per cent of them are made by women.

“For women workers in Chile, the ratification of ILO Convention 190 is a milestone for eradicating gender-based violence in our country. By ratifying it and adding it to the approval of the new constitution, we put a stop to the escalation of violence that had been occurring in our country as a result of the social, political, health and economic crises,” said Pamela Henriquez, President of CTEBA and Coordinator of the UNI Americas Women Network in Chile.

“We women realized that we had to be in the spaces of power and decision-making in order to change little by little this reality that overwhelms us. We are happy, but the work continues and with greater strength we will continue to press for the establishment and creation of effective public policies for the eradication of gender violence in Chile,” she concluded.