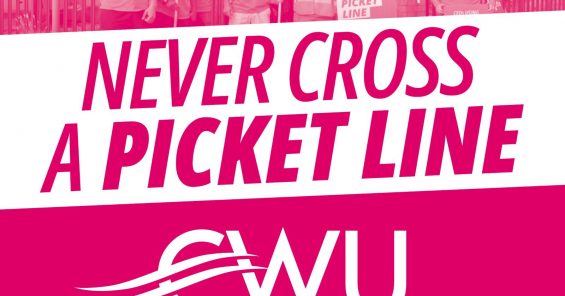 In what UNI affiliate the CWU promises to be “a hell of a week,” more than 170,000 workers across the United Kingdom are going on strike.

The workers—employed by telecoms giant BT, its subsidiary OpenReach, the Post Office and the Royal Mail Group—showed an overwhelming amount of support for industrial action, and they will be on picket lines in “every town and city in the UK” demanding wages that allow them to main a decent quality of life in the midst of skyrocketing inflation.

At BT and Openreach, CWU members first walked off the job 29 July and 1 August for the first time in 35 years after negotiations failed to get a pay rise that would compensate for a spike in the cost of living. The company imposed an annual £1,500 increase without consulting the union. This change would, in fact, be a dramatic real-terms pay cut when compared to inflation levels of over 11 per cent in the country—that could reach 18.6 per cent by year’s end.

The next round of strikes at BT will start 30 August. The workers have received letters of support from unions in the United States, Spain, Switzerland, Germany, Portugal, Italy and beyond.

CWU Deputy General Secretary and Global President of UNI’s ICT & Related Services sector Andy Kerr said, “We’re still hoping to get BT back round the table for serious negotiations, but as things stand it has sadly become clear that simply isn’t going to happen unless we take further action…so that’s precisely what we’re going to do.”

BT’s imposed pay rise is simply unacceptable, and nowhere near the current rate of inflation. pic.twitter.com/xIbjyL1kz3

With three previous rounds of strike actions with more scheduled for 26-27 August, the Post Office increased its offered pay rise from 3 to 5 per cent this week. The union has made clear that more is needed.

“It’s a step in the right direction, but it’s still less than half the rate of inflation,” said CWU assistant secretary Andy Furey. “We’re encouraged by this improved pay offer and it’s our hope that, in the talks next week, we can move further towards a fair and reasonable pay agreement – not only for 2022/23, but for 2021/22 as well.”

At the Royal Mail Group, there is a similar story of an employer not recognizing workers’ contributions by putting forward a pay offer that pays “yesterday’s wages for today’s prices” and erodes working conditions.

CWU General Secretary and President of UNI Post & Logistics Dave Ward said, “Their strategy is not ‘modernization’ it’s a levelling down. But you can’t run a business by putting workers at the bottom of the pile. This union has never faced away from change – but the Royal Mail Board must recognize that if they want to build the future of Royal Mail, they’ve got to get behind the workforce.”

Standing with your postal worker? Print and put this on your letterbox on strike days.#StandByYourPost https://t.co/IFE1MM7PG9 pic.twitter.com/XIO5HhYbHc

UNI Global Union General Secretary Christy Hoffman said, “Workers did not cause this cost-of-living crisis, and they should not bear the brunt of it either. CWU members—not top management or shareholders—kept BT, Openreach, the Royal Mail and the Post Office running during the pandemic, and now they are standing together to overcome another emergency—rising prices and falling real wages. Their fight for decent pay is the fight of so many other workers around the world, and we stand with them in solidarity.”