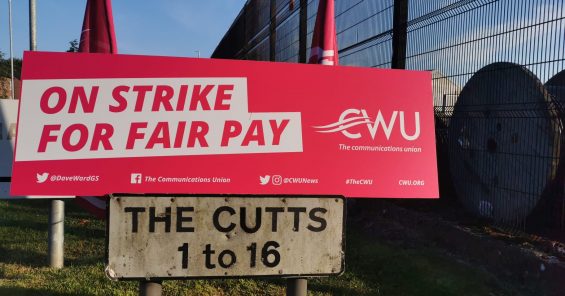 Some 40,000 members of UNI Global Union-affiliate Communication Workers Union (CWU) are striking at UK telecoms company BT Group on 29 July and 1 August. It is the first strike at the company in 35 years and is the latest in a worldwide wave of worker unrest in response to a global cost-of-living crisis.

The two-day national walkout comes after BT has refused to negotiate a pay rise that would compensate for increasing inflation. The company’s current offer of £1,500 per year would be a dramatic real-terms pay cut when compared to inflation levels of over 11 per cent in the country.

Those striking are largely Openreach engineers and BT call centre workers. Openreach is a subsidiary of BT, formerly British Telecom, that maintains the telephone cables, ducts, cabinets and exchanges that connect homes and businesses to the UK national broadband and telephone network.

“These are the same workers who kept the country connected during the pandemic. Without CWU members in BT Group, there would have been no home-working revolution, and vital technical infrastructure may have malfunctioned or been broken when our country most needed it. Our members worked under great difficulty—and got a real-terms pay cut as a reward.

“The reason for the strike is simple: workers will not accept a massive deterioration in their living standards. We won’t have bosses using Swiss banks while workers are using food banks.

“BT Group workers are saying: enough is enough. We are not going to stop until we win.”

The announcement followed a strike ballot, in which Openreach engineers voted for action by 95.8 per cent and members in BT returned a 91.5 per cent majority for the walkout.

CWU Deputy General Secretary and Global President of UNI’s ICT & Related Services sector Andy Kerr said, “The decision to take strike action was not made lightly. From the very beginning of this dispute, we have repeatedly expressed our wishes to sit down and negotiate a pay deal that treats BT Group workers with the respect they more than deserve.”

Noting that the “hot strike summer” is not just a UK phenomenon, UNI Europa Regional Secretary Oliver Roethig said, “People realize that with no action, they will face dramatic cuts in their real term income, in what they can afford to pay for. By acting together, workers change that dynamic. By bargaining collectively through their unions, workers across the UK and Europe are winning major pay increases.”