UNI joins Brazil election delegation: “We stand for democracy and against right-wing extremism” 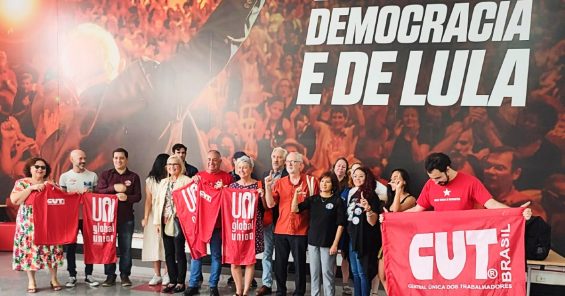 Ahead of Brazil’s consequential presidential election, UNI Global Union is joining an international mission of elected leaders, human rights defenders and trade unionists to show solidarity with the Brazilian people as they head to the polls on 30 October to make a choice whose impact will ripple throughout the world.

The delegation, organized by Progressive International, is visiting key union and social organizations, including the CUT, Contraf-CUT, the Partido dos Trabalhadores, and groups defending the rights to land and housing.

“It is an honour to receive such an important international delegation, whose members were fundamental to [former President] Lula’s release, which allowed him to contest this year’s election,” said CUT President Sérgio Nobre.

They are hearing about intimidation at the ballot box, the progress the election of Lula da Silva would create and the terrible record of current President Jair Bolsonaro. In just one term, his presidency has brought economic decline, environmental destruction, political violence, extremist threats and growing inequality.

UNISaúde Network, an alliance of care unions formed under the umbrella of UNI Americas, even brought “crimes against humanity” charges at the International Criminal Court (ICC) because of his reckless, disastrous handling of the pandemic.

The current president has also pushed through labour reforms designed to curtail the power of unions, which has long been a lynchpin of Brazilian democracy.

UNI Global Union General Secretary, Christy Hoffman, who is on the mission, said:

“We are part of this delegation because we stand for democracy and against right-wing extremism. This election is an important moment for progressive forces everywhere, and UNI came to show international support for the movement to reverse the harms of the Bolsonaro administration and to usher in a new era of economic and social justice.

“Through weakening worker protections and increasing informality in the economy, Bolsonaro’s labour laws have pushed more 30 million Brazilians back into poverty.

“Under his presidency, there has been a permanent attack on civil rights, against women, against LGBTQI+ communities as well as racial and ethnic minorities. In response, UNI—and our affiliates—have waged a permanent campaign in Brazil to advance workers’ rights and give the voice to precarious and informal workers through unions.”

Bolsonaro’s record is in stark contrast to his opponent on the ballot this Sunday, former president Lula da Silva. Lula’s presidency was marked by a long-list of progressive achievements—notably a rapid reduction of poverty.

Lula was wrongly imprisoned while previously campaigning against Bolsonaro, launching a global #LulaLivre campaign. UNI was a strong supporter of that effort, which helped free the former president in 2019.

“The far right in Brazil—and throughout the Americas—is trying to subvert democracy and weaken the power of the people,” said UNI Americas Regional Secretary, Marcio Monzane. “But we are united to defend democracy, defend trade union values and defend human rights. And this struggle will not stop on Sunday.”