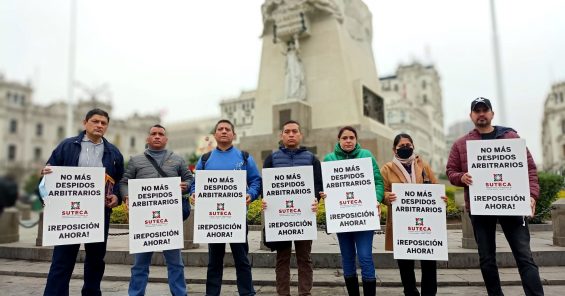 As soon as the formation of the union was made official, both companies arbitrarily dismissed the entire SUTECA Board of Directors in an illegal manner, since they have union protections.

On July 19, the Sindicato Único de Trabajadores de Entretenimiento, Casinos y Afines, SUTECA, officially filed its registration with the Peruvian Ministry of Labor, marking a major step forward for workers in the sector in terms of organization and labor rights, as it is the first union that brings them together.

The following day, Cirsa, a Spanish gaming and leisure company, and Dreams, a Chilean company, fired the nine members of the union’s board of directors. This dismissal occurred despite Cirsa’s verbal commitment to respect the right to unionize and to join a trade union organization, fundamental rights proclaimed in the Universal Declaration of Human Rights.

“This way of acting on the part of the management of Casino Miami Cirsa and Dreams before the beginning of the union’s activity hinders what should be a totally normal situation in the dynamics between the company and the union, which should be based on acting always in good faith,” declared Henry Olivera, Regional Director of UNI Americas Juegos de Azar.

“Multinational companies have to respect the unionization rights of their workers in all the countries where they operate. We express our discomfort and concern about this situation, but we will not stand by and remain silent in the face of these anti-union practices. We demand the reinstatement of the dismissed colleagues,” he said.

Today the union, UNI and union organizations in the gaming sector around the world are denouncing the repressive actions towards unionized workers, and demanding the reinstatement of the nine dismissed colleagues.

UNI Americas sent a letter to the Ministry of Labour. See the letter here.