Global solidarity with FNV and supermarket workers in the Netherlands 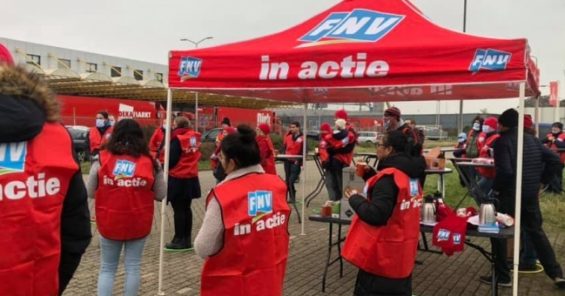 UNI Commerce Global Steering Committee has issued a solidarity statement in support of FNV and Dutch supermarket workers who are fighting for a fair collective agreement against employers’ attempt to push wages down.

“As if withdrawing Covid-19 bonuses is not enough, the supermarket employers in Netherlands are playing with fire by imposing zero percent pay rise for 2020 and pushing real wages down,” said the statement released this week.

The sectoral collective agreement for supermarket workers in the Netherlands expired on 31 March 2020 but negotiations held between UNI affiliate, FNV, and the Supermarket Employers’ Association have ended in deadlock. Meanwhile, the Covid-19 bonus paid by some of the supermarket chains- has recently been withdrawn.

The employers have offered a collective agreement for two years, with a 1.5 % pay rise to be effective from January 2021 and second pay rise of 2.5 % for March 2022. This offer was rejected by FNV because it would freeze workers’ wages in 2020 and reduce real wages given that the inflation rate is approaching 2% and workers will be paying higher social security (retirement) premiums in 2021 which will pull net incomes down.

FNV is demanding a one-year collective agreement and a 5% pay rise, retroactive from April 2020 in order to protect wages from increasing inflation and social security payments, and to appreciate supermarket workers’ dedicated work under risky conditions during Covid-19 pandemic. Less work pressure, a safe work environment and retention of benefits are among FNV’S other key demands.

As the employers dig in their heels, FNV has collected around 10,000 signatures from supermarket workers raising their demands to the employers’ association, and organized work stoppages. Now that the Netherlands has gone into a 3-week lockdown beginning on 15 December 2020, FNV has in consultation with its members, temporarily suspended physical collective actions which will be reinstated once restrictions are lifted.

UNI Commerce extends its solidarity and support to FNV and urges the Dutch supermarket employers’ association to meet workers’ fair demands including the 5% pay rise.

The solidarity statement is available here in multiple languages: