Cleaners and Security Officers Bounce Back Together for International Justice Day 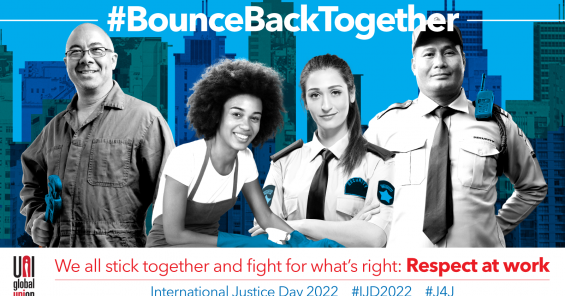 On International Justice Day 2022, unions around the world honour the millions of workers in the cleaning and security sectors across the world who play an essential role in our societies. In these difficult times, their bravery and determination are an example to the world.

“Our societies owe a debt of gratitude to the security officers and cleaners who have served in the army of essential workers during the pandemic,” said Christy Hoffman, General Secretary of UNI Global Union. “It’s time to repay this debt with rights on the jobs, inflation-proof raises and the respect that comes with unions.”

As we enter year three of the pandemic, cleaners and security officers know that our economies will only bounce back if we all stick together and fight for what’s right: Fair pay rises that beat inflation, healthy and safe workplaces, respect at work.

During the pandemic, cleaners and security officers strengthened their resolve by galvanizing public support and creating a movement to stand up for their rights on the job.

For example, just this month in Germany, IG BAU won raises as high as 16.4% in a tough fight and intense worker activity in the shopfloors.

“In difficult and tough talks, we managed to achieve a breakthrough,” said Ulrike Laux, executive member of IG BAU.  Now cleaners will continue to receive significantly more than the statutory minimum wage for their important work.  “This means that industrial and commercial cleaning remain attractive for qualified workers whom the sector is in need of. At the same time, the increase in wages is far above the inflation rate,” says Laux.

Standing together and winning is nothing new for essential workers. On June 15, 1990, a peaceful Justice for Janitors march and protest in downtown Los Angeles’ turned into something more powerful. When workers linked arms to cross a street, police officers confronted these men and women, beating them with batons and injuring dozens of marchers but ultimately the workers prevailed winning public support and important gains like better pay, healthcare and the right to a union.

As we celebrate this victory over three decades later, we are proud of the many victories won by cleaners, security workers, and others who dedicated their lives to make service jobs better for all.