Orpea: time for the scandal-ridden corporation to clean up its act 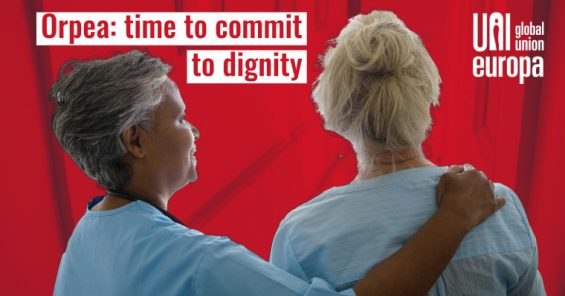 The second largest nursing home operator in Europe has received widespread accusations of deeply abusive practices. Care workers’ unions across Europe are working together to hold Orpea to account and ensure that management commits to living wages, freedom of association and meaningful collective bargaining.

Following three years of investigation, French journalist Victor Castanet published a book titled The Gravediggers. In it, he details alleged market rigging, embezzlement of public funds that were intended for people in need, as well as widespread sub-standard working conditions. “In fact, this investigation only attests to what our unions have been tirelessly denouncing for years,” said Frederic Favraud, UNICARE Europa President. These revelations have plunged the corporation into deep turmoil, triggered labour inspections and sent share prices plummeting.

Underlying these failures was the corporation’s attitude to labour relations. Unions, in France and across Europe, have been sounding the alarm on labour conditions at the corporation for some time. Understaffed, ill-equipped and with scarce training opportunities, care workers have been stretched to the limit. Orpea now has the opportunity to clean up its act if it starts listening to and cooperating with unions on an equal footing.

UNI Europa Regional Secretary Oliver Roethig and UNICARE Head of Department Adrian Durtschi alerted a year ago of how Orpea was seeking to gain a competitive advantage by cutting workers out. This was exemplified when the corporation manipulated its staff to force out French unions and replaced them with its own in-house yellow union.

In response, unions within UNICARE have been strengthening their coordination to hold the company accountable. Together, they have reinforced organising efforts which has resulted in establishing and growing unions, notably in Central, Eastern and South-Eastern Europe.

In parallel, UNI brought together a coalition of 105 investors with $3.45 trillion in assets under management to tackle the underlying issues of poor working conditions and quality of care across the long-term care sector, including through ensuring respect for trade union rights.

The alliance of unions is committed to build on this work and leverage it with the goal of creating lasting change for workers and care-users at Orpea. Good relationships have been established with key media and political actors who now understand the issues at play. Labour inspectorates are also notified and receptive to union alerts.

Union action shows the way forward to end the conditions that result from the corporation’s anti-union approach. For carers to earn enough for a dignified living, for safe staffing levels and equipment provision, for training and career opportunities, workers need access to union representation.

That means the company ought to recognise the important role that unions play in representing employees’ interests, as well as raising and maintaining standards for care workers. In effect, workers need access to unions in the facilities to address workplace issues and support them in  organising and collective bargaining. It also means bargaining in good faith and with a willingness to conclude agreements that meet workers’ needs in times of inflation and rising living costs.

The unions want to secure this with a binding global agreement which guarantees labour and union rights and decent working conditions as precondition for quality care  across Orpea’s global operations. It is time for Orpea to commit to decency. UNI and its affiliates are determined to support this change.