Postal unions meet to defend services in the region 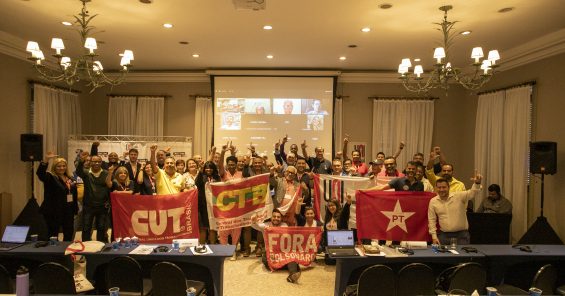 More than 50 delegates from UNI Global Union postal unions in the Americas, met in Rio de Janeiro, Brazil, on September 12-13, for the 6th UNI Americas Post & Logistics (P&L) Conference. Over the two days, participants shared the work being done in their respective countries for an innovative, reliable, environmentally friendly postal service for all, as well as strategies to stop privatization.

The Brazilian unions pointed out the importance of holding the conference in Rio at time when a there is a new bill to privatize the postal service in the country. UNI Americas has been active in a campaign to prevent privatization of postal services in Brazil.  Speaking at the conference, the Brazilian politician, Paulo Ramos, said:

“The postal service has an inseparable link with national sovereignty. Private companies wanted only profit and profit without having any commitment to social interests. It was a public and state-owned company that has the postal company, which has a security in many public policies that necessarily reach the Brazilian population. It is the oldest company and is present throughout the national territory, providing the Brazilian people with enormous security.”

“We had battles against privatization and without the movement carried out by the unions it would have happened much earlier. We are very committed to our own battles, but we also support all the battles faced by unions in the region, such as the one happening in Brazil.”

Participants also pointed concerns such as unfair competition and the need to ensure equal conditions with private companies, as well as outsourcing to delivery platforms, which do not comply with health and safety regulations at work, nor respect workers’ rights. In light of this, it is imperative for unions to unite, strengthen collective bargaining and build union power.

At the end of the second day, the unions adopted a statement in solidarity with Pakistan for the floods that have affected some 33 million people in Pakistan and where the postal service continues to provide essential services in times of disaster.

The conference also saw the election of new leadership for the 2022-2026 term. The delegates present elected Jan Simpson of CUPW Canada as the new president for the sector:

“I thank Jim for all the work he has done over the years. I am looking forward to working with you, I have said in the last few days that we are going to guarantee a public postal service for all and we will continue to work towards that, thank you.”

In the 1st and 2nd vice-presidency, the president-elected Jan Simpson will be joined by Brazilian union leaders José Rivaldo of FENTECT and José Aparecido Jiménez Gandara of FINDECT for two years respectively; for the second seat, Alberto Cejas from FOECYT for the first two years, then Ricardo Ferraro from FOECOP and Juan Palacios from AATRAC one year each.

For his part, Jim Sauber, expressed his gratitude to all the organizations present for the support and trust placed in him during his term as president for two terms: “It was a great pleasure to share with all of you these eight years of arduous struggle, sharing experiences and working together to achieve the objectives set.”