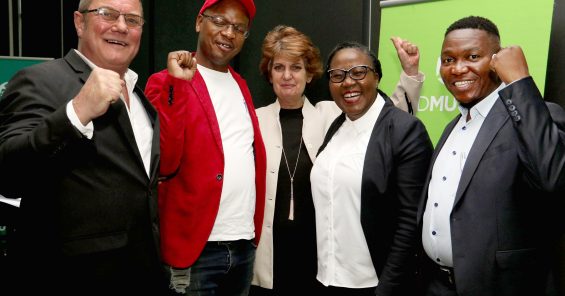 After a long struggle, UNI Global Union finance affiliate Sasbo has concluded an agreement with insurance giant, Old Mutual, which will see Sasbo members represented directly at the bargaining table.

Although a previous agreement was signed in 2017 that afforded Sasbo limited rights, Sasbo was excluded from all collective bargaining negotiations at the company.

Now, after reaching the required union membership thresholds to participate at the Central Engagement Forum as weel as the Business Unit Forums, this new agreement means Sasbo members at Old Mutual can at long last have a collective voice at the company to negotiate terms and conditions.

“This has been a long time coming, but we are thrilled to finally be able to take our rightful and long overdue seat at the bargaining table and fight for a decent deal for our members at Old Mutual,” said Sasbo General Secretary Joe Kokela.

The new recognition agreement ensures that Sasbo can now effectively protect the rights, represent the interests and start collective bargaining on behalf of Sasbo members at Old Mutual.

However, the union remains excluded from negotiating salary increases until it reaches the 25% per cent threshold of the collective bargaining unit.

Keith Jacobs, Regional Secretary of UNI Africa said, “This is a significant breakthrough – having a seat at the table means that Sasbo can fight effectively for decent work and dignity on the job for thousands of workers in South Africa.”

“UNI Africa fully supports Sasbo in its fight to ensure workers at Old Mutual get the recognition, rights and benefits they deserve.”

Old Mutual is an investment, savings and insurance company which operates in 14 countries across Africa and Asia and employs over 30,000 people.