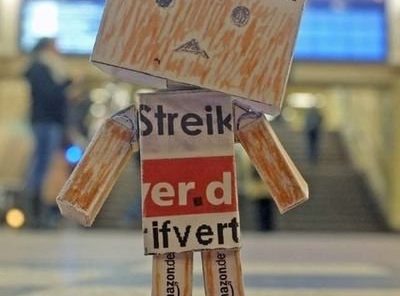 Joining workers from all over Europe who are protesting a cost-of-living crisis that is eating up their wages,  Amazon employees at HAM2 in Winsen, near Hamburg, went on strike today for better pay and improved working conditions. According to their union ver.di, a UNI affiliate, around 1,700 people work in Winsen, and a third of them have temporary contracts.

“We are on strike because Amazon has made a wage adjustment that is far too low,” a ver.di representative told the German press. ”Amazon is now paying three percent more without negotiating with the union. That is not enough for us. Against the background of high inflation, that is not enough.”

In Germany – Amazon’s second biggest market after the United States – workers have been striking a collective agreement, better pay and improved conditions for years. At a strike in Bad Hersfeld this summer, Mechthild Middeke, secretary for the ver.di trade union, said the cost of living is a heavy burden for many employees. “If Amazon makes Prime membership 28% more expensive and justifies this with rising costs, then we have these rising costs too and want compensation for it,” she said.

Across the world, Amazon workers and civil society organizations have been critical of the tech giant for its brutal working conditions and use of union-busting tactics.

“German Amazon workers are striking again because the company refuses to share its success with the people who have made it so successful,” said Mathias Bolton, Head of UNI Global Union’s Commerce sector. “Its time that Amazon sign a collective agreement that has the decent pay and safe conditions workers deserve. Until then, the global labour movement will continue to stand with ver.di—and Amazon workers around the world—to make Amazon pay.”