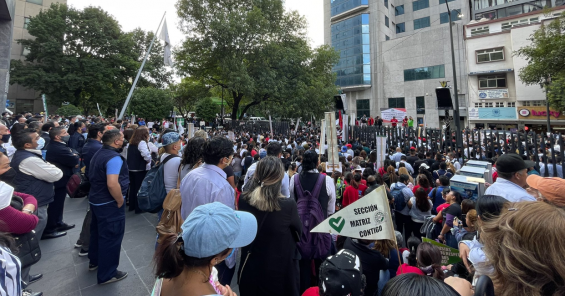 Thousands of workers at Mexico’s predominant telecoms company, Telmex, have gone on strike for the first time in nearly 40 years after negotiations for a new collective bargaining agreement (CBA) broke down.

Members of UNI Global Union affiliate, the Union of Telephone Operators of the Mexican Republic, STRM, are striking in a dispute over pay, violations to the CBA and the failure to open up around 2,000 job vacancies.

“Today it has been demonstrated that inflexible, intransigent positions and lack of will are not the correct path for the good progress of labour-management relations, since it is clear that for three years the STRM has shown the political will to the company and the labour authority to resolve this negotiation in the best terms. However, since the counterparty (Telmex) has not shown a similar disposition, they have left the union no other alternative than to decide to resort to a strike.”

After the strike announcement, both the union and Telmex agreed to a mediation process through the Ministry of Labour, during which they are expected to reach a resolution within 20 days of their first meeting, which takes place on 25 July. To help matters, a technical committee has been set up with the mandate to analyse the financial cost and actuarial calculations of the various proposals by the parties to solve the labour liabilities, the retirement scheme for new employees and the recruitment of 1,942 additional workers.

Earlier in June, a strike was postponed and both parties agreed to revise the CBA, which established a 4.5 per cent salary increase for active and retired workers. However, the union is seeking a pay rise of 7.5 per cent to match inflation in Mexico.

According to the union, three years ago Telmex, which is controlled by the family of tycoon Carlos Slim, promised to offer almost 2,000 vacancies throughout Mexico, but has not yet complied. As a result, the company operates with fewer personnel than required. The union is also calling for greater investment to cover operational and administrative needs.

STRM also accuses Telmex of outsourcing some of the promised vacancies to contract companies, meaning the workers are not covered by the CBA and weakening the union.

“We stand with workers at Telmex and our affiliate STRM as they strike to defend their collective agreement, create good unionized jobs and for a pay increase in line with inflation. We urge Telmex to engage in dialogue with the union as soon as possible and listen to the union’s demands.”

Telmex is part of Slim’s America Movil – which uses the Claro brand in the rest of Latin America. America Movil is a Mexican company and the biggest telecommunications company in the region.