The Amazon Panopticon is Bad for Workers and for Democracy 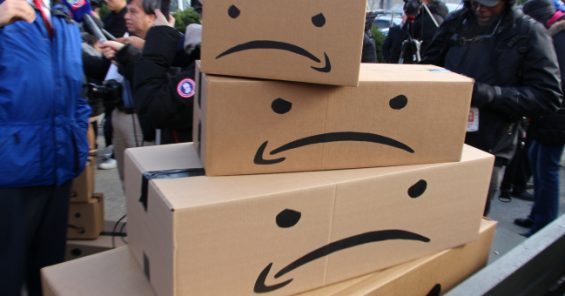 According to The Amazon Panopticon—UNI Global Union’s latest report on the intrusive and all-encompassing Amazon worker surveillance systems—Amazon fast purchasing, and ultrafast delivery process is hiding the pernicious effects this system has on its 1.3 million workers. Amazon warehouse workers and drivers are constantly subjected to a high-pressure environment that breaks their bodies and ultimately forces them to quit.

“Amazon workers are unwilling subjects in a sophisticated and all-encompassing experiment in digital surveillance, one that is having disastrous impacts on their bodies and lives,” said Christy Hoffman General Secretary of UNI Global Union. “But make no mistake, Amazon workers across the world are standing against Amazon´s gruelling and intrusive work environment, united to build democratic worker power through unions to promote a workplace where every worker is respected and treated with dignity.”

Scanners, cameras, private investigators, and other methods not only pressure Amazon employees to work faster. With its unrealistic and body-breaking productivity goals, and intrusive employee surveillance, Amazon treats workers as disposable items. And now we know that Amazon’s staggeringly high worker turnover is not a flaw of the system—it’s the system.

“In every step of the process workers are constantly watched, recorded, and their labour measured,” said Alessandro Delfanti, Associate Professor at the University of Toronto and one of the authors of the report. “The oceans of data Amazon collects about its workers—their productivity rates, location, driving habits, and personal opinions, among others—provide the company with unparalleled amounts of information. Amazon uses it to control workers. Among other effects, the power Amazon derives from this surveillance can undermine attempts by workers to unionize to improve their working conditions.”

According to the report, “Amazon facilities have industry-leading injury rates, and workers around the world report stress and anxiety as the rhythms of work required by the company force them to avoid hydrating to reduce bathroom breaks, pee in bottles, and take unsafe shortcuts. Widespread precarity in the company’s warehouses and delivery networks makes many employees even more vulnerable to surveillance as they strive to get their next contract renewal.”

“Amazon’s ambitions depicted in this report are the reminiscence of a bad dystopia. At the heart of it, robotisation and the total control of the individual as a worker. This disappearance of the human in favour of corporate profitability must be prohibited. We must remind Amazon of its duties as a company and legislate to protect workers,” said Leïla Chaibi, Member of the European Parliament.

To fight back, the authors urges that “new policy choices that are strong enough to counter the challenges generated by Amazon are needed if we are to stop the harms the company inflicts on workers across the globe.

“This report has highlighted the most problematic effects of workplace surveillance at Amazon. Now it is up to workers, their unions and policy makers to make the changes necessary to build a more just and sustainable future,” the report concludes.