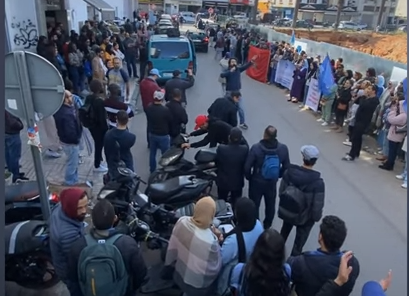 The UMT has reached out to the Moroccan National Contact Point to the OECD asking it to intervene in the company’s apparent abuses of freedom of association and the right to collective bargaining, and the union is also calling for international solidarity in support of these workers.

The UMT, representing the majority of the 1,400 workers of Business Casablanca 2S, repeatedly tried to dialogue with the company regarding employees’ declining purchasing power. The union says that the company was unwilling to address concerns about stagnant wages and steep inflation. Out of all other avenues to bring their demands to the company, workers went on strike 21 April.

“Employees are determined to fight to improve their living and working conditions and to denounce precariousness in call centres,” the union said in its call to action.

Striking is a constitutionally protected right in the country, and the rights to union representation and collective bargaining are enshrined in the OECD Guidelines for Multinational Enterprises.

Despite these protections, the company dismissed the UMT delegates and representatives shortly after the walkout. The company blocked their salaries and filed criminal charges them because of their union action. The leaders were even wrongfully arrested on these charges.

“These dismissals are a clear anti-union act by Comdata and its subsidiary. We believe there can be no other reason for the dismissal of these workers than as retaliation for legitimate union action. We call on Comdata, and their French clients using Moroccan labour and the Moroccan NCP to ensure that these UMT union representatives are rehired,” said Keith Jacobs, Regional Secretary of UNI Africa.

UNI Global Union demands that the seven workers be immediately reinstated and their salaries for the periods during which they were wrongfully arrested.

Business Casablanca 2S’s parent company, Comdata, has 7,000 employees in Morocco is one of the top five operators in the sector in the country.