UNI calls on brands to sign Accord on Rana Plaza anniversary 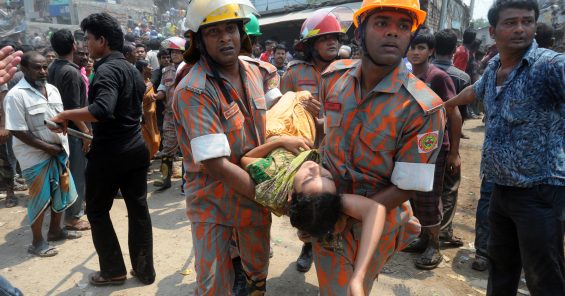 On the ninth anniversary of the Rana Plaza garment factory collapse, UNI Global Union is calling on more brands to sign the International Accord as the most effective means to uphold worker safety in the Bangladeshi textile and garment industry and fulfil their supply chain responsibilities in Bangladesh and beyond.

A total of 171 global fashion retailers have so far signed on to the International Accord for Health and Safety in the Garment and Textile Industry. The legally binding agreement continues and expands the work of the Bangladesh Accord, which was established by UNI and IndustriALL global unions to improve safety in the country’s garment industry after more than a thousand workers lost their lives in the Rana Plaza tragedy on 24 April 2013.

“On April 24th we will forever remember those who lost their lives and were injured in the Rana Plaza disaster – and brands must do the same,” said UNI General Secretary, Christy Hoffman.

“The International Accord is a model for supply chain accountability in the global garment industry, allowing brands to meet their due diligence commitments and protect millions of workers making their products. If brands are serious about safety, they should sign up to the Accord as the proven mechanism to improve factory conditions, prevent incidents and save lives.”

Some of the world’s biggest fashion retailers such as H&M and Zara have signed on to the International Accord when it took over on 1 September 2021, however brands such as French multinational retailer, Auchan, have yet to recommit. Other US brands such as Walmart, Disney and GAP, which all source from Bangladesh, as well as major textile buyer, IKEA, are marked in their absence.

The International Accord goes further than its predecessor agreement, allowing for potential expansion into new territories. Last month, Accord representatives visited Pakistan and Sri Lanka and met with key stakeholders to explore implementing the agreement into those countries. Feasibility studies for expansion into other ready-made garment producing hubs are also ongoing in India and Morocco.

In addition, the Ready-Made-Garment Sustainability Council (RSC), which implements the International Accord safety programme in Bangladesh, is consulting the local government to include boiler safety in factory inspections. The RSC is further expanding the scope of the work to include labour rights and the environmental impact of production.

While 93 per cent of all hazards have been fixed since initial inspections of 1,600 factories supplying Accord signatories began in 2013 – there are still factories with serious issues that need to be remedied.

“The Accord’s continuation and expansion are essential; workers are still dying in the garment and textile industries. Its model of inspections, worker safety training and a real complaints mechanism, backed up by a legally binding commitment from brands, has prevented a repeat of Rana Plaza in Bangladesh, and now we will keep pushing to prevent another catastrophic tragedy in other countries,” added Hoffman.