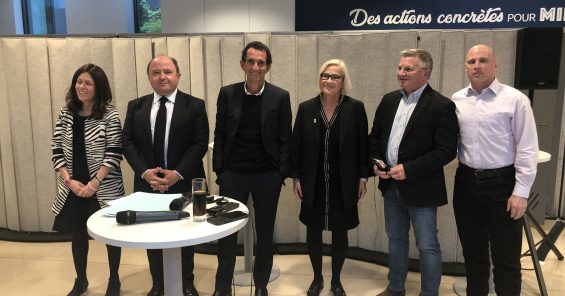 UNI Global Union has today (5 October2022) renewed and reinforced its global framework agreement with Carrefour, promoting social dialogue, diversity and the fundamental labour rights of the multinational retailer’s 321,000 employees around the world, as well as thousands of workers in its global supply chain.

The agreement was signed by UNI General Secretary, Christy Hoffman, and Carrefour Chairman and CEO, Alexandre Bompard, at a meeting of the Carrefour European Works Council (EWC) at the multinational retailer’s headquarters in Paris, France.

The renewed agreement, which is extended until October 2025, includes additions to enhance workers’ rights, such as:

To underline UNI and Carrefour’s determination to safeguard workers’ health, the new agreement includes an appendix of the joint declaration on protective measures for workers and customers in the food retail sector during the Covid-19 pandemic, which was signed by UNI, Carrefour and other retailers in 2020.

The global framework agreement, which was first signed in 2001 and strengthened in 2015 and 2018, promotes constructive social dialogue between the two parties and promotes the implementation of workers’ rights to organize through an agreement on union access, including the sharing of information with new hires, and recognition.

The agreement upholds the principles of collective bargaining and includes strong clauses on diversity, gender equality, prevention of violence against women, and a safe and health work environment.

Over the years, the global agreement with Carrefour has helped to secure better working conditions, stronger union representation and collective bargaining at Carrefour operations in many countries across the globe including Argentina, Colombia, Korea, Romania and Turkey.

More recently, the global agreement with Carrefour played a key role in obtaining recognition for local trade unions in Uganda and the Dominican Republic, paving the way for collective agreements in both countries.

“Today, we celebrate the achievements of our previous global agreements and look forward to building on these successes in the future. This agreement has proven to be invaluable time and time again. It has enabled workers to organize in countries where it is hardest to join and form a union and made a real difference in workers’ lives. During the pandemic, UNI and Carrefour (along with other companies in food retail) came together to agree upon best safety practices to protect workers on the job.  And today – as we face staggering inflation, we recognize that social dialogue is an invaluable tool to navigate these choppy waters.”

“Renewing the global framework agreement for another four years is a proof of our partnership and strong social dialogue with UNI Global Union. We are building together to reinforce our values and to drive our company through mutual respect, freedom of association and improving working conditions for our workers. The world is changing, and we need to keep up with the changing world, but we also need to preserve and advance our values. We are proud to renew the global framework agreement.”