Unions join forces to stop violence and harassment in commerce 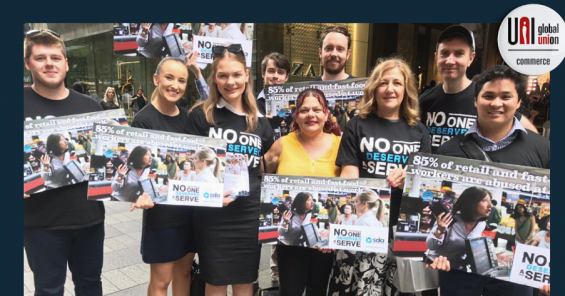 UNI Global Union and affiliated commerce unions across the world called on governments and retailers to stop violence and harassment against commerce workers on the second global action day on 17 November.

Around 75 union representatives from 20 countries took part in a global webinar, organized by UNI’s commerce sector to focus on the best practices in combatting violence and harassment in the sector.

Highlighting the key role women played in the adoption of ILO Convention 190 on Violence and Harassment at Work, Ruben Cortina, President of UNI Global Union, said, “Thanks to the #MeToo movement, thanks to the women who took to streets across the world, we have a strong tool to fight back. Now it is time to get the Convention ratified and reflected into practice.”

“We have this campaign for a reason, to create a worklife free from violence and harassment for our workers” said Linda Palmetzhofer, the President of Handels. “We have a long way to go but we can make it happen if we join forces.”

Peter Hellberg, the Vice President of Unionen, said: “Third-party violence in commerce must be properly addressed by the retailers. It is a fundamental right to have a safe work environment and we need better EU legislation.”

A new UNI webpage “Stop Violence and Harassment in Commerce” – designed as an information hub for the campaign – was also launched at the webinar. More than 30 articles, reports and several campaign materials are already available in the webpage that is the first of its kind as it pertains to a specific sectoral campaign to combat violence in the workplace.

The webpage gathers information from the dedicated campaigns run by UNI Commerce affiliates including SDA’s “No One Deserves a Serve” campaign in Australia, UA Zensen’s Campaign Against Unreasonable Complaints and PAM’s “Let’s Behave” Campaign among many others and provides information on the tangible results achieved.

“In our upcoming global conference in Atlanta, we will also have a roundtable that will focus on best practices” said Mathias Bolton, Head of UNI Commerce. “We will discuss and adopt a resolution that will highlight our commitment to stop violence, harassment, discrimination and abuse in our sector.”

A new video was launched on the global action day to raise awareness of the issue:

❌ It's time to eradicate violence and harassment in commerce.