With the passing of Curt Persson and Gary Nebeker, the global union movement lost two giants 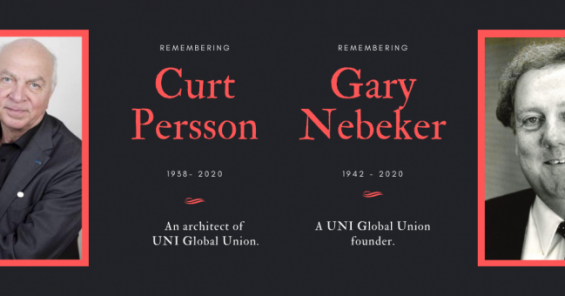 Curt Persson and Gary Nebeker, two giants of the global trade union movement, have passed away. The two men, union leaders in their respective countries and on the international stage, were architects of UNI Global Union.

Persson rose from being a letter carrier in Sweden to become the President of the Postal, Telegraph and Telephone International, renamed Communications International, one of UNI’s predecessor organizations. He died of complications from COVID-19 in November.

UNI founding Deputy General Secretary Philip Bowyer said, “Curt Persson was a genuine, good person. He was a pleasure to work with. The perfect President of an international trade union. He was calm, tough, and far seeing. He was not afraid of change. In fact, he embraced and advocated for change but insisted it must be used to improve the lot of workers.”

From a local organizer to an international campaigner, Nebeker worked on every level for workers’ rights for the UFCW in the United States. He later became the President of FIET, one of the global union federations that merged into UNI. Nebeker was President during the negotiations over the creation of UNI and was instrumental in UNI constructing and establishing its Nyon headquarters.

“Gary never wanted any fuss to be made of him, he was always down to earth, there was no grandstanding from him and he understood the meaning of loyalty to a cause, to an organization and to working people,” Philip Jennings, former UNI General Secretary, said. “We express our thanks to him for his work, his friendship and commitment.”

Both will be deeply missed by the UNI family. Please read Philip Bowyer and Philip Jennings’s loving tributes below.