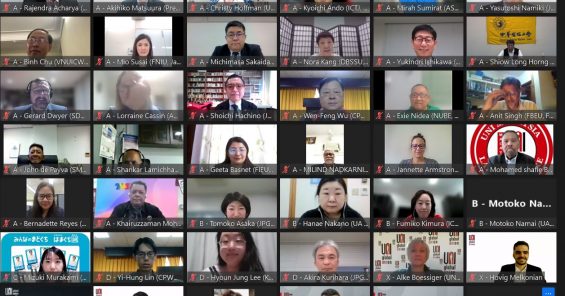 The UNI Asia & Pacific (Apro) Executive Committee held its 30th meeting on the 20th and 21st of April 2022 virtually. Regional leaders from  12 countries shared developments throughout the region and redoubled commitments to expand organizing and collective bargaining as well as strengthen democracy, human rights and solidarity.

UNI Apro President Akihiko Matsuura opened the meeting with a tribute to all union members, workers, and those who fell victim to COVID-19 and all civilian casualties of the Myanmar military coup and the recent Russian invasion of Ukraine. They also honoured Brother Yang Byoung-Min, former President of the Korean Financial Industry Union (KFIU), who passed away in March at age 64.

Opening remarks from President Matsuura, UNI General Secretary Christy Hoffman, and guest speaker ITUC Asia Pacific General Secretary Shoya Yoshida touched on the recent developments relating to the attacks on democracy and workers’ rights in the Asia and Pacific region over the past year.

Trade unions and their members remain under severe pressure in Hong Kong, Afghanistan, Myanmar and the Philippines. At the same time, workers’ rights are at risk of being undermined in places like India and Indonesia.

Globally, new crises have taken people’s attention away from the pandemic. Russia’s invasion of Ukraine threatens to disrupt and bring about a realignment of the world order that likely would affect the world economy in the coming year. In addition to these new geopolitical and economic challenges, the trade union movement needs to continue to stay on top of the existing priorities of organizing and trade union development work while continuing to take concrete steps to address ongoing issues created by the pandemic.

On that note, the meeting approved the new organizing plans for the coming years ahead. This includes the work to develop two organising centres in South Asia and Southeast Asia, modelling on UNI’s existing centres elsewhere. A digital organizer will be added to supplement and support the region’s affiliates’ online organizing efforts.

UNI Apro will also continue to pursue constructive social partnerships and labour management relations to create secure and sustainable jobs. These efforts will be reinforced by the effective implementation of global agreements and by using multilateral guidelines as an organizing tool.

Further to that, as the pandemic subsides, UNI Apro will coordinate with the new policy capacity at UNI and refocus efforts on policy and advocacy work on geopolitical and climate justice and other contemporary issues. The region will intensively engage the affiliates to develop policy directions appropriate for the Asia and Pacific context.

The meeting heard reports from affiliates who shared both challenges faced and the achievements made.

FIEUN from Nepal, as the only finance sector union in Nepal, has grown its membership many folds thanks to the assistance UNI and UNI Apro rendered through the organizing initiatives. In 2021, it successfully increased nearly 400 per cent the fee-paying membership to UNI. CTWU Taiwan reported on their success in securing better salary raises and several benefits despite launching an ongoing strike to pressure ChungHwa Telecom to dialogue with the union regarding the company reorganisation plans.

Some affiliates also reported the positive movements of laws affecting workers’ rights in their countries.

Indonesia’s Constitutional Court ruled in late 2021 that the Omnibus Law Chapter on Job Creation is unconstitutional and will need to be remedied within two years. ASPEK Indonesia is actively monitoring this development and in dialogue with all relevant partners to ensure the articles in the legislation that harm workers’ rights are struck from the law.

The VNUICW shared that the latest amendment of the Vietnamese labour code increased coverage of welfare benefits to workers not covered under any industrial bargaining units. The maximum overtime has been capped at 200-300 hours per year for most industries. The country is also going to ratify the ILO Convention 87 in 2023.

SDA Australia reported the successful passage of a law that increases penalties for third party violence against commerce workers. Likewise, many affiliates are striving to lobby their governments to ratify the new ILO Convention 190.

The meeting reviewed the latest situation in Myanmar as reported by the UNI Apro Regional Secretary Rajendra Acharya and unanimously adopted a fresh statement on Myanmar.

The statement reiterates the committee’s condemnation of the military coup on 1 February 2021. It noted that despite international and regional efforts, the situation has not improved – with more than 1,700 killed, tens of thousands arbitrarily detained, and more than 400,000 displaced.

It calls upon all the leaders in the Asia and Pacific region to increase pressure on the junta to hand back power to the democratically elected civilian leaders and urge all international and regional businesses to refrain from conducting any business relationships that will finance the junta’s attacks on the Myanmar peoples’ human rights. It finally restated the solidarity toward all people of Myanmar.

The meeting agreed to distributing the statement to all affiliates in the region and encourage them to use it as a lobbying tool within their own countries.  UNI General Secretary Christy Hoffman extended appreciation for the report and statement and announced the statement would be put up for further endorsement at the upcoming UNI World Management Committee meeting. She also pledged UNI would continue to pressure the international banks they are in dialogue with to do more to stop or reduce financial operations in Myanmar.

The meeting additionally heard several updates from affiliates in Korea and the Philippines. Korea’s recent Presidential elections have seen the election of a conservative party candidate who has made anti-labour pledges in this campaign. While the Philippines is undergoing its own president elections in which the popular candidates are the son of the late dictator Ferdinand Marcos and his vice-presidential running mate Sara Duterte, daughter of the outgoing President who launched a bloody war on drugs in the country. The meeting took note of the difficult situation in Hong Kong, where the recent passage of a National Security Law is hindering the safe and effective participation of affiliates in international meetings.

The meeting closed with the agreement to start preparations for the 6th UNI Apro Regional Conference and in light of the pandemic disruptions that it would be held in 2024 instead of 2023.