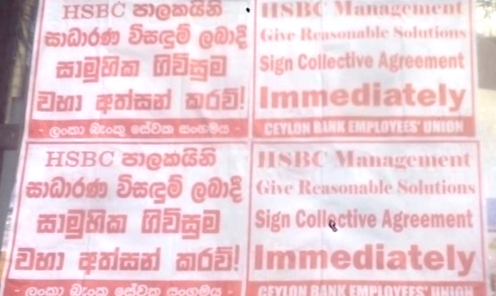 The Ceylon Banking Employees’ Union (CBEU) in Sri Lanka is campaigning for a fair and equitable collective agreement with HSBC management covering 2021-2023.

Negotiations were off to a rocky start when the HSBC management demurred on the union’s offer to start discussions in December 2020 before the previous agreement expired on 28 February 2021.

With no progress after 17 rounds of talks for over a year, the matter escalated to the Sri Lanka Commissioner of Labour. The Commission mediated between the two parties on 24 February 2022, forestalling a planned industrial action. A follow-up meeting will be held soon, on 3 March 2022.

The CBEU is the peak union body representing all bank employees working across 18 state-owned and private or foreign banks in Sri Lanka’s banking industry. It has successfully concluded collective agreements with most of them, except for a few including HSBC.

The union recently sent a letter of appeal to the Group Chief Executive of HSBC. They urged him to restrain HSBC Sri Lanka from distributing higher management bonuses and salary increments in March 2022 until a fair collective agreement is inked.

In their letter, the union charged the HSBC Sri Lanka management had unilaterally decided on items that should have been covered in the CBA discussion. And despite a supposed downturn in profitability, higher bonuses and allowances were allocated to a select number of senior staff.

They also observed that the management displayed a pattern of preferring individual contracts while avoiding or delaying collective agreements whenever previous agreements expired. The union says that this active avoidance as well as discriminatory practices favouring senior grade staff to the detriment of unionized staff, are equivalent to union-busting.

“It is very demoralizing to see that a small number of senior employees are enjoying bonuses and huge salary increments while no considerable benefits are allocated to the rest who also have worked hard to reach the targets and goals set by them.”

Both the UNI Asia and Pacific Regional Secretary, Rajendra Acharya, and Finance Director, Jayasri Priyalal, pledged their full support for the CBEU and the staff of HSBC. They also called upon the HSBC Sri Lanka management to come to the meeting with sincerity to reach a fruitful conclusion for all parties.