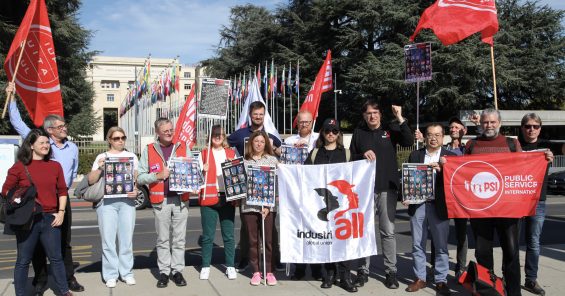 Representatives from UNI Global Union, IndustriALL Global Union, IUF and Public Services International gathered outside the United Nations in Geneva today to demand the release of jailed trade unionists and for the UN to recognize the National Unity Government of Myanmar. The global unions, also including BWI, ITF and IDWF, released the following statement:

Geneva, 10 October 2022. Global unions, representing 200 million workers worldwide, call for the immediate release of all political prisoners in Myanmar, in particular the more than 60 trade unionists who have been unjustly incarcerated by the military junta since its coup in 2021. We demand the immediate dismissal of the trumped-up charges filed against all jailed democracy activists, strong assurances that their health and safety inside the prisons are secured, and their swift and safe return to their loved ones.

Their continued imprisonment is a travesty of justice and makes a mockery of democracy. Trade union rights are globally recognized and guaranteed by the Universal Declaration of Human Rights, and the International Labour Organization’s (ILO) Fundamental Principles and Rights at Work. For workers and trade unionists to be imprisoned for the exercise of these rights in the defence of democracy cannot be allowed to pass unchallenged. Human and trade union rights are not suggestions – they are universal and inalienable rights that must be applied to all working people without discrimination and/or fear of repression. 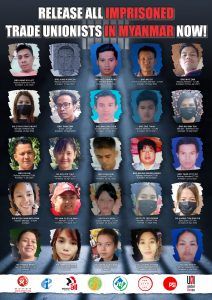 Trade union rights can only thrive in a climate of democracy. They can only grow and flourish under governments that are committed to democratic processes and the rule of law. Thus, the Global Unions reaffirm their call to the United Nations General Assembly to recognize the credentials of Myanmar’s National Unity Government (NUG) as the one and true democratic government of the Myanmar people. By recognizing the NUG, we safeguard the human and trade union rights of Myanmar’s working people, and once and for all, put an end to the military junta’s brutal dictatorship and false representation of the country before the international community.

The Global Unions also condemn in the strongest terms possible the widespread human rights abuses, torture and killings against Myanmar’s democracy activists both inside and outside the prisons. We strongly urge the United Nations and all relevant international human rights institutions to take strong action on this matter and bring to justice all those responsible for these atrocities.

Trade unions must never rest until all trade unionists, everywhere in the world, are free from repression and abuse of their fundamental rights. Democracy is the right of all working people. Whenever and wherever there is tyranny, trade unions will respond with unity and solidarity.