Putting workers at the centre of the European Care Strategy 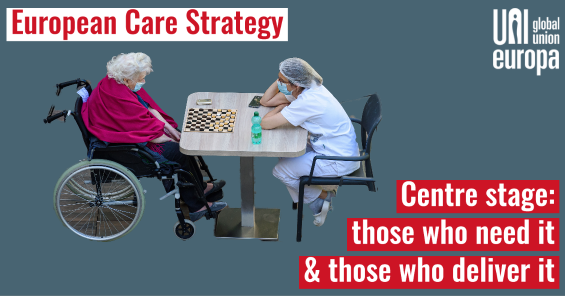 UNI Europa is pushing for the upcoming European Care Strategy to enhance trade union rights, collective bargaining, working conditions, staffing levels and quality care. To ensure that workers’ interests are embedded in the strategy, UNI has been working with key decision-makers in all three legislative EU institutions.

“The quality and safety of care people receive cannot be decoupled from the conditions of care workers. In the aftermath of the pandemic, there is a collective reckoning that both care recipients and workers are not being adequately resourced. We will not abandon the hundreds of thousands of people working in the private care sector. Now is the time to push for improvements and the European Care Strategy is a major instrument to fix the devastating shortcomings that the past two years have exposed across Europe,” said Oliver Roethig, Regional Secretary of UNI Europa.

The European Commission is the central player in establishing the European Care Strategy. UNI’s approach aimed to demonstrate the shared objective of social partners and shareholders in raising the bar in the care sector and showing strong collective bargaining as the main tool the EU can push. To do so, it set up a meeting between the Investor Initiative for Responsible Care, coordinated by UNI, and the Commissioner for Jobs and Social Rights Nicolas Schmit. Launched in 2021, the Initiative brings together more than 130 institutional investors, managing assets of worth €3.7 trillion.

Commissioner Nicolas Schmit responded very positively and stressed the need for a Sectoral Social Dialogue Committee in Social Services. UNI Europa is currently pushing to advance and strengthen the efforts to create an inclusive and representative sectoral social dialogue structure.

“Strong trade unions are needed to maintain safe patient-staff ratios, protective equipment provision or manageable workloads that deliver quality care over the long term. There is a recognition amongst all players that trade unions can provide unique insights to drive changes within companies in the sector. Over the last year, our actions laid a strong foundation for improving company policies and practices through investor dialogue,” said Roethig.

UNI Europa has established long-standing relationships with Members of the European Parliament in key committees. This has helped prompt the institution’s input to the European Care Strategy also reinforces the collective say of care workers.

Two parliamentary committees recently put forward a joint own-initiative report entitled Towards a Common European Action on Care. The Employment (EMPL) and Women’s (FEMM) Committees report stressed the important role that unions will need to play in the long-term care sector. The report was adopted by the European Parliament and specifically seeks to advance workers’ organizing rights.

Own initiative reports are the main vehicle for the European Parliament to initiate legislative action (for which it also requires European Commission). If the provisions were to be integrated into EU law, it would create a new framework for collective bargaining in the broader care sector – including personal and homecare workers – across Europe. This report sends a strong message to the European Commission for the European Care Strategy to ensure care workers have a strong collective say. UNI Europa lobbied several MEP and European Parties, which led to the inclusion of several key points like union rights.

“This European Parliament report is a testament to how UNI Care Europa’s organizing activities in Central Eastern Europe and Southeast Europe, and its advocacy and lobbying work at EU-level can go hand in hand to strengthen workers’ rights and build union power,” said Adrian Durtschi, Head of UNI Care.

Through the Council, EU Member States also have a say in shaping the European Care Strategy. UNI has been working with key allies to make a strong case to keep union demands in the final version.

In Spain, unions have succeeded in putting the crisis in care at the top of the government agenda. Most recently, UNI took part in a high-level seminar with Spain’s Vice President and Minister of Labour and Social Economy Yolanda Diaz, organised by CCOO trade union. The event focussed on creating a European strategy for the care sector with a feminist and trade union perspective.

“We must work together to make the necessary changes to achieve the professionalization of the care sector with feminism at its core,” said Diaz.

“The great state pact on care is one of the central elements to configure the new social contract of the 21st century,” said Unai Sordo, CCOO General Secretary, underlined the importance of investing in care in light of the pandemic.

“On every continent and country, care work is done by women. We cannot rule out the role of systemic gender discrimination when the majority of those in managerial positions are men and the vast majority of workers are women.”

She said giving workers a voice through collective bargaining was the most effective way to increase the main challenges facing workers in the care sector, particularly poverty wages and inadequate staffing levels.

“Sectoral collective bargaining gives workers the possibility to improve conditions across the industry and to be part of the solution. There are signs that the EU is waking up to the underlying structures that suppress workers’ conditions. If the EU is serious about changing the situation, decision-makers must start by demanding that public procurement – a major pressure point in the care sector – limits eligibility to those companies that respect workers’ collective bargaining rights,” said Mendez.