Telecoms workers in Mexico on verge of national strike 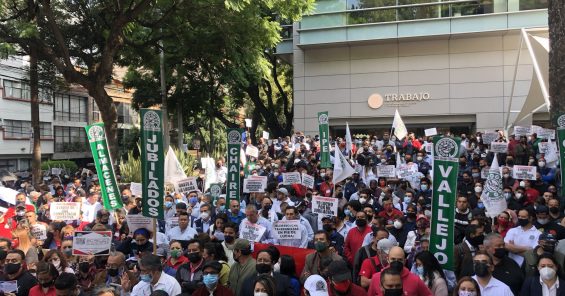 The Union of Telephone Operators of the Mexican Republic, STRM, issued a second strike call to Telmex for violations to the collective bargaining agreement and the non-fulfillment of new job openings. In June, a strike was postponed and both parties agreed to revise the collective bargaining agreement, which established a 4.5 per cent salary increase for active and retired workers.

According to the union, three years ago the company promised to offer almost 2,000 vacancies throughout Mexico, but has not yet complied. As a result, the company operates with fewer personnel than required.

“We agreed to mediation from the Secretary of Labour, but we have not made any progress – the company does not want to engage in dialogue,” said Francisco Hernández Juárez, general secretary of STRM.

“The workers are fighting to defend the collective bargaining agreement because Telmex has failed to create the vacancies as negotiated, which are necessary to provide a good service, and because the company wants to weaken the CBA by modifying and reducing the retirement clause of the contract. The union has shown its willingness to have  dialogue, but the strike will go ahead if the company is still intent on provoking a conflict,” he concluded.

STRM also accuses Telmex of outsourcing some of the promised vacancies to contract companies, meaning the workers are not covered by the CBA and also weakening the union. Furthermore, the union says the company is violating the terms of the CBA in certain areas.