Trade unions address the impact of digitalization in the financial sector 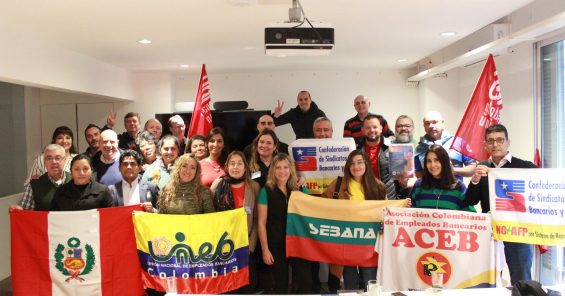 From 30 August to 1 September, Montevideo hosted the Conference on Digitalization in the Financial System, organized by AEBU, UNI Americas and FESUR. The meeting began with a discussion with an expert panel on the 20 years of the financial crisis in Uruguay, where the role of social movements and all political parties was fundamental to find a way out.

The 2002 crisis, unlike other crises, had the financial sector as a major internal dynamic actor that was very relevant for the entire economy of Uruguay. “Maintaining democracy was the signal. The role of the social bases, through solidarity and self-management, was fundamental to give it continuity. The aim was to build a tomorrow without leaving the country,” said Gabriel Quirici, a history teacher and researcher. “In the same way, the role of AEBU was fundamental to warn, to take care of jobs, not to put on a closed pose, but to contribute to the way out,” he concluded.

They stressed that the destructive capacity of a crisis is very fast, but the recovery is asymmetric and dramatic and requires more time. In periods of prosperity, the increase in household income does not guarantee a full recovery. This is why it is important not only to think in terms of poverty, but also in terms of vulnerability. “During a crisis, the first dimension that deteriorates is income, but even if it improves, you have to look at other dimensions. We have to think about three concepts of poverty: minimum threshold, vulnerability as the possibility of falling into poverty, and inequality as the distances between people and households,” said Andrea Vigorito, an economist and researcher specializing in inequality and poverty.

As it has a scaffolding role – if the financial sector falls, its fall generates the fall of the other sectors because it allows the development of the rest. During the pandemic, the financial sector was part of the solution to avoid liquidity constraints. Elbio Monegal, president of AEBU, said: “This meeting has been fundamental to analyse the 2002 crisis, 20 years on, with some of the actors directly involved, such as Leonardo Costa, deputy secretary general of the Uruguayan presidency in 2002. “It helps us to understand the economic and social consequences, so that we can correct them and prevent them from happening again,” he said.

On the Impact of Digitalization on the Financial Sector

The debate continued with a subsequent discussion on the transformations of the financial sector in this 4th Industrial Revolution. “We are seeing how policy and legislation are lagging years behind technological development, that is why we are working on these debates and we are happy that in the trade union sphere we are thinking strategically, with a gender focus. What kind of work will there be and under what conditions, what draft laws are underway on how to regulate telework and how to include trade unions in the strategy?” asked Dörte Wollrad, regional representative of the FES.

How are we prepared to build better collective ways of thinking politically and socially? Alma Espino, a researcher with a focus on gender, said that gender debates cannot be left out, as gender differences translate into inequalities between the possibilities of being and doing for women and men. “The relations that we know as social relations of power, especially in trade unionism when we talk about social classes, here we are talking about social relations of power between men and women. We are not talking about differences that do not make us anything more than a different external characterization,” she said.

On the other hand, Lucía Pittaluga, economist, teacher and researcher specializing in innovation and development, pointed out that the technological revolution is not neutral, but can be shaped. “Is there only one way to automate work? Narratives impose on us that there are things we cannot change, but if we research them we see that there are other factors to understand. Feminist and environmental movements are shaping what we call the technological revolution.”

The conference ended with a practical workshop with the aim of carrying out a regional analysis of the situation of the sector in the participating countries in order to produce a document with a narrative from the perspective of the workers. How does technology impact on the world of work? In the financial and banking sector, we see how new technologies are reshaping employment and changing the tasks of workers. This is seen from the point of view of quality of employment, quantity of employment, trade union strategies to take advantage of these changes for workers.

The participants exchanged on the transformations they are experiencing in their workplaces and shared the launch of the Participatory Drafting System Platform in order to continue to advance the work and collective discussion on these issues. They also concluded that the difficulties that are being experienced are not proportional to the strengthening of trade unions in each country.