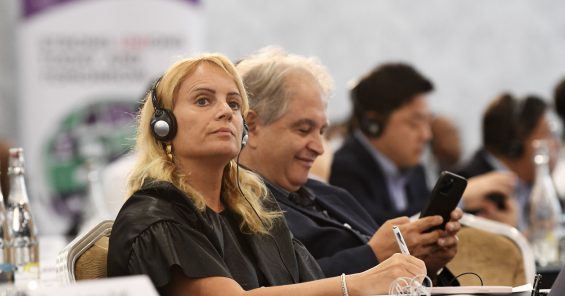 More than 130 representatives from UNI Global Union’s trade union affiliates in the finance sector met in Ireland this week and resolved to use their collective power to defend workers and customers in the face of major restructuring and job losses in the banking sector.

Trade union participants from 54 unions in 40 countries gathered in Dublin on 13 and 14 September for the UNI Finance conference, hosted by Irish affiliate, the Financial Services Union (FSU).

“Change is happening in the finance sector and the one thing we can be certain of is more is on the way. Managing that change so that staff are protected, and customers are not adversely affected must be our goal,” said FSU General Secretary, John O’Connell.

Conference participants were given a preview of a significant new study from Eurofound on restructuring in the European retail banking sector, which is due to be published imminently. The study identified how trade unions and social dialogue had played a major role in softening the impact of job losses in the sector, which meant that most collective redundancies were voluntary in nature, with terms of departure negotiated and agreed – often through early retirement. At the same time, the sector continued to hire younger people with different skill sets.

Unions from Argentina, India, Ireland, Italy, Malaysia, Nepal, Spain and South Africa shared their experiences of restructuring at multinational banks and the successful strategies they implemented to protect workers and safeguard services.

“Finance workers are on the front lines of digitalization.  And your collective example – the many case studies that were presented today – showed your creativity and determination and willingness to fight- to reduce involuntary retrenchment to the absolute minimum, to make sure that every person landed on their feet- through upskilling, through reassignment, through early retirement and severance packages, etc.  This is a comprehensive study in Just transition in our digital world.”

Participants discussed the future of finance, including the impact of remote work on workers as well as unions’ attempts to organize.

Leading global economist, Raymond Torres from Funcas thinktank in Spain, was a key speaker on the second day of conference. He said the finance sector is being pressured by a combination of scarcity of natural resources, increased risk caused by climate change, and digital disruption. However, he said that the finance sector has a great role to play in finding solutions to the big issues of the day, particularly through financing renewable energies. He said that trade unions’ role in fighting for workers’ rights is key to reducing risk and a stable global economy: “If there is no social justice – this will always be a risk to world peace”.

UNI’s Head of Finance, Angelo Di Cristo, noted the absolute need to organize banking workers in the USA – the world’s largest economy – in order to increase strength, and implored affiliates to work together to increase organizing capacity and work with UNI to build union power.

Speaking at the end of the conference, Rita Berfola, from Brazilian union Contraf-CUT and President of UNI Finance, said:

“We need a global response to a global problem. We will strengthen ourselves and our struggle in the face of restructuring. We will never give up the fight!”