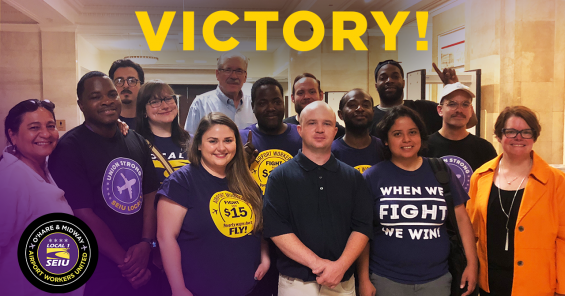 In a historic win for workers, SEIU Local 1, part of UNI affiliate the Service Employees International Union, led a successful living wage initiative that will raise pay for roughly 6,500 contracted airport employees — including caterers, de-icers, baggage handlers, wheelchair attendants, aircraft cleaners and cargo workers among others. The workers will see their minimum pay increase to $18 by 2023.

“Today’s passage of a wage increase is a huge victory for Chicago’s Airport Workers,” said Genie Kastrup, Executive Vice President for SEIU Local 1. “Many workers will receive anywhere from a $1 raise to a $5 raise depending on their job classification – this is life changing. This increase recognizes the essential work of airport workers and ensures that they can now provide for themselves and their families. I look forward to continuing our work to be a strong advocate for all airport workers.”

The pay rise is part of an ordinance passed by the Chicago City Council’s Committee on Workforce Development. Under the ordinance, the minimum wage for these workers will rise to US$17 an hour, up from $15, on July 1. On March 1, 2023, it will jump to $18 an hour. And then, on July 1, 2024, and every July 1 thereafter, the minimum wage will increase to account for inflation.

The push in Chicago is part of a years-long drive by SEIU members across the country.

“For years, thousands of airport workers have been fighting for dignity and respect. In Chicago and beyond, they are winning. Airport workers deserve praise for spearheading exciting and successful organizing campaigns in a sector where many thought it was impossible to organize,” said Christy Hoffman, General Secretary of UNI Global Union.

In addition to pay, the ordinance mandates that the approximately 70 contracting companies at Chicago’s two major airports, O’Hare and Midway, ensure that these good, living wage airport jobs and careers are going to the city residents who need them most.