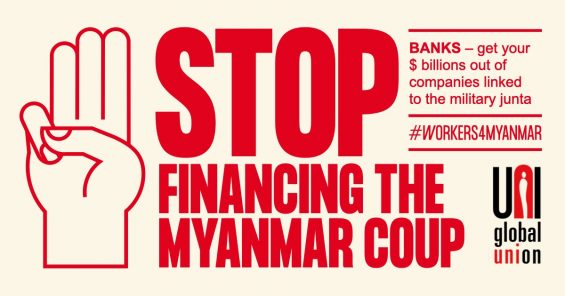 In a webinar on the International Day for Democracy on 15 September organized by UNI Finance, UNI General Secretary Christy Hoffman said:

“Global capital must start to feel the pressure – it is not okay for business to funnel resources to the military. It is not okay for banks and others to invest in these companies. And we need action now if we are going to save lives and restore democracy.”

More than a thousand people have been killed, including children. Over five thousand citizens, including government officials and trade unionists, have been arrested, and whole villages have been attacked.

“We cannot stand by and watch this happen,” said Rita Berlofa, President of UNI Finance. “We must demand international banks stop sponsoring the coup in order to end the bloodshed and restore order and democracy in Myanmar.”

UNI is calling on banks with more than a billion dollars invested in Myanmar to withdraw their investments in companies with links to the military junta. As a first step, UNI is asking affiliates to write to Swiss bank, UBS, which has a long history of investing in countries with repressive regimes, including apartheid era South Africa. UNI will be sending out a template letter to affiliates shortly.

Joining the webinar, Brother Maung Maung, President of the Confederation of Trade Unions of Myanmar, called for support comprehensive economic sanctions against the junta.

“Yes, economic sanctions will lead to job losses but it is the bitter medicine we must take in order to remove this evil military regime. We have to suffer now for the future of our children. We believe the military will collapse quickly,” he said, adding that hundreds of thousands of workers have already lost their jobs.

Sharan Burrow, general secretary of the International Trade Union Confederation said: “We need support for the National Unit Government in Myanmar, who were legitimately elected. We need pressure on ASEAN governments, and we need financial support for workers.”

UNI’s investment engagement adviser, Lisa Nathan, explained how banks have a responsibility to have a due diligence process in place to prevent an adverse impact on human rights from their investments:

“Banks invested in companies linked to the military regime must use their leverage as shareholders to stop the flow of money from these companies to the junta. The banks must demand the companies suspend all payments to the Myanmar state-owned entities, and save this money in a trust until democracy is restored. If the companies are unable to do so they must end business with the junta.”