Workers, regulators and social media creators give Amazon its hottest August on record 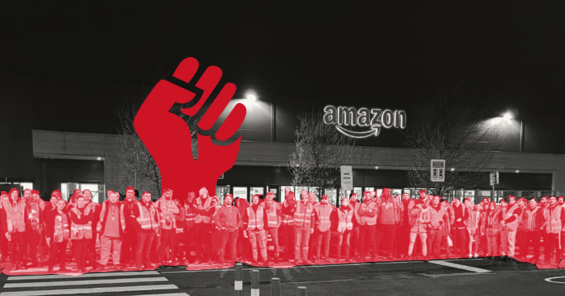 As temperatures swelter across the Northern Hemisphere this August, worker action at Amazon is also heating up. In country after country, unions, regulators and online influencers are redoubling efforts to change Amazon’s disgraceful—and potentially illegal—practices.

“Amazon’s growth has dragged down wages and workplace safety standards, and workers across the world are at a breaking point. They are tired of the constant stress put on their families by inadequate pay. They are exhausted from the squeeze of inhumane production goals, made harder by record-breaking heat. That is why they are standing up, walking off and demanding more,” said Christy Hoffman, General Secretary of UNI Global Union.

Workers are united in the UK

Amazon workers across the United Kingdom walked off the job or slowed production to a crawl to protest the company’s meagre proposed pay rise of 35p per hour. The country is in the midst of a cost-of-living crisis, with inflation expected to hit 13 percent in October. Amazon’s proposal amounts to a significant pay cut when considering purchasing power.

The GMB Union is calling for a £2-an-hour raise in wages to offset inflation and to acknowledge the hard work that Amazon has profited from.

“We have been there for them during the pandemic and made sure the country was connected,” one Tilbury warehouse worker told The Guardian. “For all this just getting 35p, it’s an insult. . . .  am getting stressed out and anxious just thinking about [high energy bills] and that 35p is not going to cover nothing.”

German union ver.di led another strike action at Amazon’s Bad Hersfeld warehouse last week. For years, union activists at the company have demanded that Amazon follow the national agreement for mail order and commerce workers, but Amazon has refused.

“At meetings, it was repeatedly mentioned that the rising costs are a heavy burden for many employees,” union secretary Mechthild Middeke said in a statement. “As a colleague told me, the issue, in a nutshell, is: If Amazon makes membership 28 per cent more expensive for Prime customers and justifies this with rising costs, then we also have these rising costs and want compensation for them.”

Spanish regulators hit the company for illegal use of temporary workers

UNI affiliate CCOO repeatedly called for action about agency workers at Amazon, and now the Labour Inspectorate of Catalonia issued a fine of 5.8 million euros to Amazon and several contractors for illegal practices involving temporary workers.

A reported 150 Amazon air hub workers walked off the job 15 August demanding a $5 an hour pay rise, better health and safety standards and the ability to organize for change on the job without retaliation. The workers, employed in Amazon’s airfreight division, say they must rely on government anti-poverty aid to feed their families, and that temperatures at work have been dangerously high—topping 100 degrees F (38 C).

Meanwhile, workers in Albany, New York, have called for a union election, and in Alabama, RWDSU-filed challenges to Amazon’s conduct are still pending.

“From Alabama to New York, Amazon workers in the United States are demanding a voice on the job, wages that can support a family and safe conditions,” said Stuart Appelbaum, President of the RWDSU and of UNI Global Union Commerce. “But this fight doesn’t stop at national borders, and it will require all of us who care about workers’ rights and basic fairness to work together.”

To support Amazon workers’ organizing, 70 of the world’s most influential TikTok creators—with a collective following of 51 million people—launched the People over Prime campaign. The social media activists, backed by Gen-Z for Change, say they are “joining together to stand in solidarity with Amazon workers and union organizers by refusing to monetize our platforms for Amazon, including all direct Amazon sponsorships and usage of Amazon’s storefront.”

Additionally, the U.S. federal government launched a broad probe into health and safety at Amazon warehouses the first week of the month, and it is also investigating the deaths of three workers in New Jersey during the mid-July Prime Day rush.

These labour investigations come as the U.S. Federal Trade Commission is ramping up its inquiry into “onerous” conditions for customers to quit Amazon’s highly profitable Amazon Prime program.

UNI Global Union coordinates the Amazon Union Alliance that brings together Amazon workers from around the world to fight for collective bargaining and the affirmation of the dignity of work at the world’s second largest private employer.