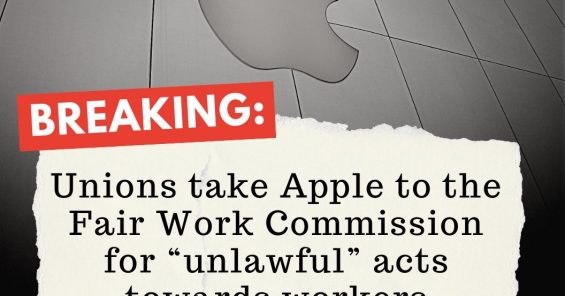 UNI’s Australian affiliates, the Shop Distributive and Allied Employees Association (SDA), and the Australian Services Union (ASU) are taking Apple to the Fair Work Commission for “unlawfully” seeking to ram through a new agreement with below-inflation wage rises, and clauses that could see workers work up to 60 hours a week without overtime.

“With inflation above 6 per cent and rising, this would see Apple employees already struggling with the cost of living finding it even more difficult to pay for food, fuel, shelter and the other essentials of life,” said SDA national secretary Gerard Dwyer. “For a company that is making at least $11 billion in profits annually from its Australian operations, its behaviour is simply un-Australian.”

In documents filed with the Fair Work Commission, the unions accuse the American tech giant of unjustly denying entry to one of its stores to union representatives hoping to speak with staff and blocking a request for more time to consult with union members.

“May be unlawful and its attempts to ram through a sub-standard agreement that would leave mostly young people working up to 60 hours without overtime is unethical,” said ASU national assistant secretary Emeline Gaske.

The talks represent the first time that Apple has had to negotiate with unions over the pay and conditions of almost 4,000 employees across 22 retail sites. Apple has offered annual pay rises of 2.5 per cent after its last non-union agreement expired six years ago.

“On the eve of the National Jobs Summit when employers and workers are supposed to be finding common ground and working together for a fairer workplace system, Apple’s actions are out of step with the community’s expectations said the ASU’s Gaske.

“Apple workers in Australia and everywhere have the full support of the global labour movement to fight back against bad faith arm twisting strategies to try to lock them into a bad deal for families,” said Mathias Bolton, UNI Global Union’s Head of Commerce.