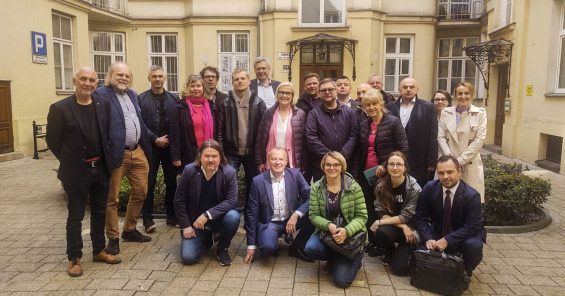 The Advisory Board of UNI’s Central and Eastern European Organising Center (COZZ) met in Warsaw on 28 and 29 April to review five years of campaigning and union growth in the region.  With teams of lead organizers and organizers located in Poland, Hungary and Czechia, COZZ can now boast a depth of experience barely imagined at its launch in 2016.

In his opening remarks, COZZ Director, Rafal Tomasiak, reported that over 3,500 workers and organizers have been trained by the Centre which now employs over 30 people.

The meeting started with a look back over the five-year period and with testimony from organizers, affiliates and workers.  COZZ taught us to “look what you can do if you trust us, if you trust yourselves” said one activist.

People noted that it was once considered unthinkable that organizing was possible in this part of Europe but “we have proven that we can organize anywhere”.  However, “shifting the culture and union environment in Central and Eastern Europe…is more like a marathon than a 100m run” said one.

Anna Bacia, a worker dismissed for union organizing by ORPEA, praised the “invaluable contribution” of COZZ to win her reinstatement, and helping to organize a union and later collective bargaining at her worksite and beyond. “The care union in Poland now represents workers in ten care homes and the Ministry now wants to take a closer look at the industry as a whole.”

Founded by UNI, COZZ also provides organizing support to the European Transport Federation in the dockers, rail workers and aviation sections. IndustriALL Europe was also present at the meeting and noted its intention to begin organizing soon in the three countries of COZZ plus others.

In addition to its organizing work, COZZ has also launched a project called Unions Help Refugees (UHR), to provide concrete union support for the recent flood of refugees from Ukraine in their search for good jobs.  The objectives are to show a friendly union face, and to help workers avoid human trafficking, the exploitation of refugee wages, or black-market conditions.

“In the past five years, COZZ has succeeded expectations and been a dynamic force in the region to build union power, lift workers and now extend its support to job-seeking refugees from the Ukraine. Our congratulations to the whole team for their terrific work and achievements that continue to go from strength to strength.”

The UHR project is just getting started and has hired a young staff from the Ukraine, Poland and Belarus which is mapping available resources for all of Poland.  It will start putting up posters around Poland next week to complement its communications on social media.

It is estimated that around 1.5 million refugees are currently living in the homes of Polish people, most of whom are women with children. The UHR staff observed that, while the refugees are, in general, fairly educated, the biggest obstacle to finding work is that many do not speak Polish and so are driven towards low skilled service jobs where language requirements are minimal, often in the black market and without regular payment.

Care organizers from other countries in the region also gathered together at the COZZ office to plan their next phase of organizing in light of the recent ORPEA Global Agreement, the renewed post pandemic focus on nursing homes and the likely influx of Ukrainian refugees to the care industry.