Decisive ruling on platform employment in Italy shows the way 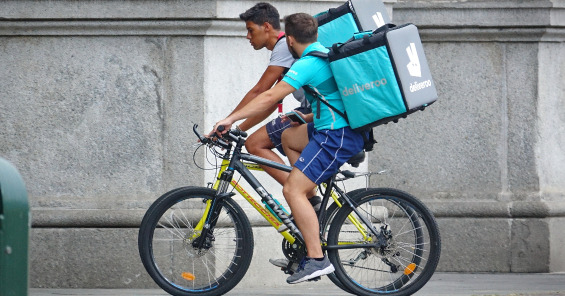 Since he began working as a delivery driver at Deliveroo Italy in 2018, Giuseppe Di Maggio has been classified as self-employed. However, a recent court ruling has changed that, and now he and his coworkers have the rights of company-employed workers.

Given the increasing role of delivery platform in the commerce sector and the ongoing work at EU level towards a directive to protect the rights of people who work through employment platforms, we take a closer look at this case.

Deliveroo’s system used for recording Di Maggio’s availability to take on work penalized him for not offering to work on certain shifts or during weekends, effectively controlling his work time. The delivery rider and his union UILTuCS (Italian Union for workers in Tourism, Commerce and Services) decided to take the food delivery giant to court over its false “self-employment” classification and won.

The Italian court has ruled that the relationship between Deliveroo and Di Maggio was not self-employment but of subordinate nature and that the giant must now hire Giuseppe through the National Collective Agreement for the Tertiary sector. Giuseppe will have access to all the rights that come with this. “I hope that this victory will encourage more workers in my situation to take on the fight against bogus self-employment,” commented Giuseppe.

What has been achieved here is of great significance as it establishes that the work carried out by riders is subordinate work.

Brunetto Boco, General Secretary UILTuCS said, “we are ready to take this forward: providing the category with its own contract so that workers have the regulatory and legislative tools appropriate to get best protection and work safely.

“The use of an algorithm in the work performance cannot be an alibi to evade the elements of subordination implicit in this working relationship.

“The application of the collective agreement of the tertiary sector, to the employment relationship, bodes well for the possibility of further protection and representation of workers in this sector.

“We now have an extra tool, a ruling that recognizes what we have long been saying: this is a subordinate job, riders have rights and must have the protections they are entitled to. We hope that the consistent line of recognition of the application of the National Collective Agreement for the Tertiary sector is also followed by other platforms and realities. We will always fight so that rights, as in this case, are respected.”

Why is this an important ruling?

✔ Because it takes apart the argument used by many employment platforms that flexible work means self-employment: the ruling proves that flexibility and subordination can go together!

✔ Riders will now have access to all rights associated with the collective bargaining agreement for the commerce sector.