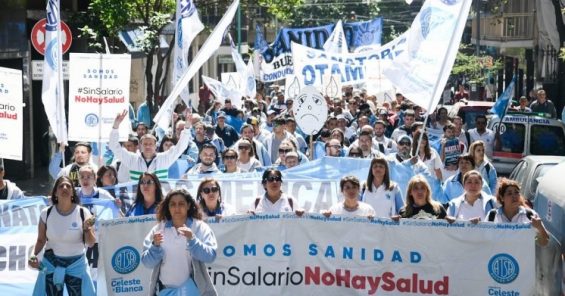 On 1 November, the Argentinean Federation of Health Care Workers’ Associations (FATSA) reached an agreement with the Chamber of Employers in the care sector for a wage increase that will improve the quality of life for 35-thousands of workers.

The agreement will boost pay by 37 per cent over five installments. The raise comes in addition to the union’s previous agreement with employers to increase pay by 59 per cent. In other words, workers have will have won a wage increase of 96 per cent in the period between April of this year and March 2023.

“Once again, health care unions across the country took the lead in defending the rights of the workers we represent. Our strength at the bargaining table is knowing that we count on all of you, all of the workers, on your determination and union unity. Without decent wages, there is no health; without union unity, there is no victory,” said Héctor Daer, Secretary General of FATSA and President of UNI Americas.

This union win makes clear that care has been and will continue to be essential. It was one of the most impacted sectors during the pandemic. Respect for these workers, who sustain the health system, and their tireless work must be reflected in fair wages and decent conditions.

“FATSA once again demonstrates its organization and mobilization capacity, and the union’s power, today, is reflected in this agreement for workers,” said Adrian Durtschi, UNI Care Head of Department. “Today we celebrate this agreement together with our FATSA colleagues, because without wages there is no health”.

“The mobilization of FATSA’s affiliated unions across the country along with the federation’s perseverance and determination to defend wages has uplifted conditions for care workers. FATSA has always been decisive, taking the necessary steps to achieve its objectives.”, he concluded.