Historic victories for Just Eat and Deliveroo workers in Europe 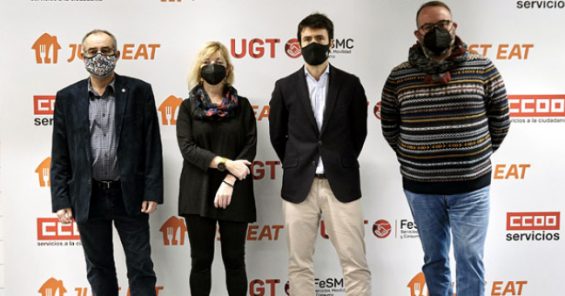 Food delivery workers at Just Eat in Spain and Deliveroo in the Netherlands will now be covered by collective agreements providing a host of benefits and rights, thanks to major wins by UNI Global Union affiliates in both countries.

The collective agreement between Just Eat Spain – the country’s biggest delivery platform with 2.5 million users – and Spanish unions CCOO and UGT, is the first of its kind and comes under Spain’s new Riders’ Law which classifies food delivery couriers as employees. The agreement guarantees 30 days annual leave, a maximum working day of nine hours and health & safety protections for delivery workers at the company.

Under the agreement, which took effect from the start of January 2022, delivery workers will also have the right to disconnect and privacy from digital surveillance.

Elsewhere in Europe, a judge in the Netherlands ruled in favour of a case brought by UNI’s Dutch affiliate, FNV, against multinational food delivery company, Deliveroo. It means that Deliveroo riders are now covered under FNV’s collective agreement for the transport of goods, enabling riders to benefit from a fixed hourly wage, holiday and sick pay and payment during waiting time, as well as other benefits. The ruling applies retroactively to all delivery workers who currently or previously worked at Deliveroo, and riders are invited to report to FNV to jointly claim an employment contract under the new collective agreement.

The verdict comes after another appeal case ruled that the deliverers are employees and not freelancers, as Deliveroo claimed.

Willem Dijkhuizen, manager FNV Transport & Logistics, said: “This ruling is again good news for the meal delivery workers. Because they now fall under this collective labour agreement, their employment conditions are regulated properly and they have certainty about their income.”