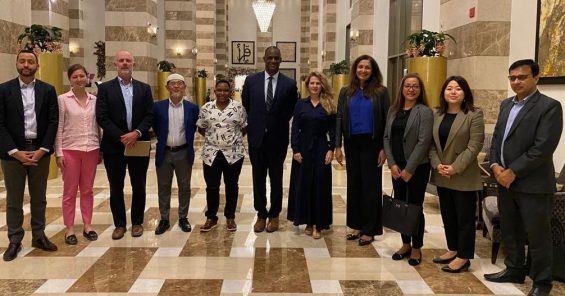 Under Secretary of State for Civilian Security, Democracy, and Human Rights Uzra Zeya and U.S. Ambassador to Qatar Timmy Davis met this week with UNI Global Union representatives to discuss workers perspectives on the implementation of labour reform in the gulf country. The Under Secretary praised the global labor union federations work in Qatar as “paramount in pushing for elimination of the kafala system and giving workers platforms to voice concerns.”

Mrs. Zeya expressed her appreciation and support of the work carried out by UNI’s Community Liaison Officer (CLO) and promised to convey their observations to the government of Qatar.

With only 313,000 citizens, Qatar’s swift modernization has depended on over 2.3 million foreign workers, mostly from Asian and African countries. Largely due to the 2022 FIFA World Cup and the rise of the tourism sector, the number of migrant workers has exploded in recent years to fulfill the country’s constant need for rapid construction. The decision to hold the FIFA World Cup in Qatar in 2022 triggered a global outcry about the conditions for migrant workers and resulted in a 2017 agreement with the ILO to pursue change.

In 2019, the government of Qatar announced sweeping improvements to its labour laws, including the end of the notorious “kafala” system- which denies workers permission to change employers or leave the country without permission.  The new legislation allows workers, including millions of migrant workers, to change employers freely.  In addition, the government established a non-discriminatory, evidence based minimum wage, the first of its kind in the Gulf States. These changes are the result of years of pressure on Qatar from the global labor movement, lead by the ITUC, and human rights groups.

As part of the international labour delegation to monition labour law reform in Qatar, UNI representatives also met with the Qatari Minister of Labour Dr. Ali bin Samikh Al Marri and Under Secretary of Labour Mr. Mohammed Al Obaidly to discuss progress and challenges in the reform process. The key issues discussed included the need to expand worker representation, increasing action against bad employers, including economic sanctions, health and safety improvements and workers protections during the FIFA World Cup.

In addition to its work in the private security sector, UNI’s World Players Association and the ITUC have been working in partnership with the Sport and Rights Alliance (SRA) to ensure that international sporting organizations (ISOs) embed human rights commitments into all of their activities and throughout the entire life cycle of their major events.

Along with the ITUC and other global union federations, UNI Global Union will continue to support the process of labour reforms to benefit migrant workers in Qatar.