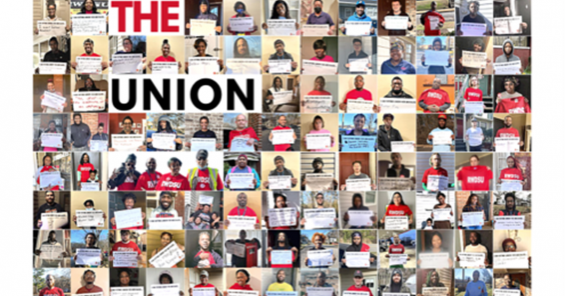 RWDSU charges that Amazon has been removing union literature from breakrooms, changing work rules to limit workers’ ability to talk to others about unionization while not on work time and requiring attendance at anti-union meetings (called “captive audience” meetings).

“Our organizing committee has worked hard to post our pro-union messaging fliers next to Amazon’s anti-union ones in the facility, as is our right under the law. I personally have hung up so many fliers on my very limited break time and during unpaid time off. I’ve done it because I so strongly believe we need to bring change with a union here. Not only was it discouraging to see our hard work removed, but it concerned us who was doing it given we know it’s protected under the law. When we heard from our co-workers that management was intentionally silencing us and removing our fliers it explained where the chilling effect among our co-workers was coming from,” said Anthia Sharpe, BAmazon Union Worker Organizing Committee Member, and Amazon BHM1 Associate.

In challenging Amazon’s coercive captive audience meetings, the union is seeking to overturn a precedent which has for too long allowed employers in the United States to compel attendance to anti-union meetings.

“Being forced to attend the captive-audience anti-union trainings was degrading. Amazon treated us like mindless robots, downloading mis-information to us. And the irony is, these meetings are the longest I’ve ever gotten to sit at work. If it’s impossible to allow me adequate break and bathroom time, why is it possible, let alone mandatory, for me to sit through hours of anti-union trainings? It should be our choice if we have to sit through one-side’s arguments or not, it’s protected under the law and needs to be stopped permanently,” said Roger Wyatt, BAmazon Union Worker Organizing Committee Member, and Amazon BHM1 Associate.

Last year the  National Labor Relations Board ordered a re-run  election after it found that Amazon’s conduct in the 2021 election gave Amazon an unfair advantage.

“Amazon clearly needs a lesson about fundamental rights and workplace democracy,” said Christy Hoffman, General Secretary of UNI Global Union. “Their coercive behaviour in the first election forced a second one, and yet they are continuing their anti-union campaign. Enough is enough.”